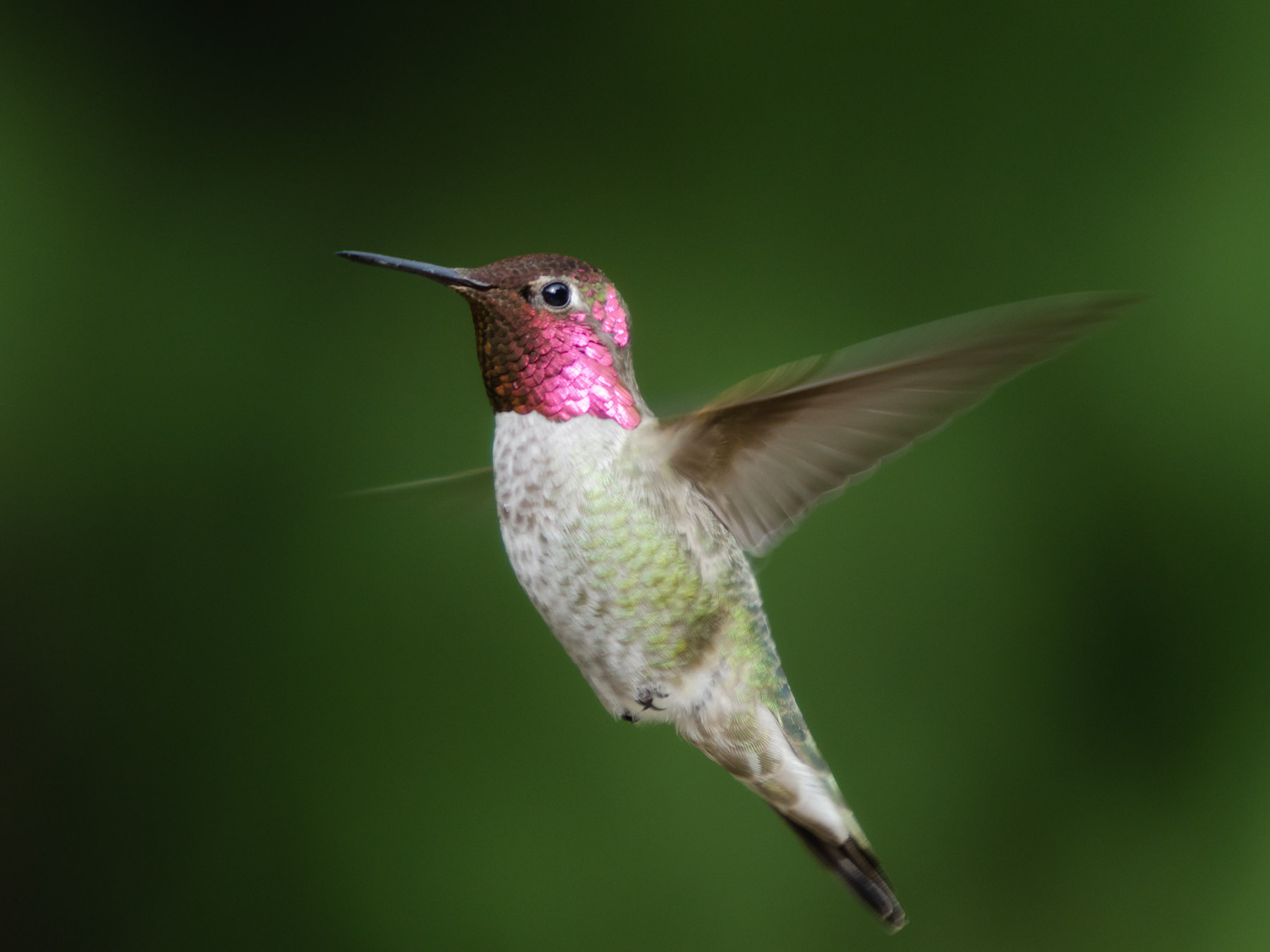 The Anna’s hummingbird is a relative newcomer to Mayne Island. In fact, it has only been a year-round resident for the last decade or so, although we don’t know for sure that the birds that breed here are the same ones that overwinter here. In the 1930s the Anna’s nested only from northern Baja California to San Francisco Bay. Today it has expanded its range north as far as southwestern British Columbia and east to Arizona and into western Texas. The reason for the expansion is thought to be its preference for (and the availability of) urban/suburban horticultural flowers and feeders. Rising winter temperatures may also contribute to its expansion.  Because of its roots in the Mediterranean climate of central California, the Anna’s hummingbird nests in late winter to early spring (from December to May), and it times its nesting to the emergence of food plants and insects in that region.

My first experience with the Anna’s hummingbird, confirming that it was on Mayne as a wintering species, was hearing a sharp squeak as I was riding my bike past a house with feeders. Thereafter, other feederwatchers were detecting a largish hummingbird at their feeders well into the fall and through the winter. The tell-tale squeak I heard was described to me as a sound similar to the sharp beep that your smoke alarm makes when the batteries are low.

How do they make that sound, anyways?

I became intrigued with how the Anna’s male makes this sound. I was aware that the sound came at the bottom of the male’s dive when he detects a female, another bird, or even us in its territory, but did not know how it was made. I went to the literature again.

Many bird species have specific sounds they make to announce their presence, to mark their territory or attract a mate.  Those sounds can come from vocalizations, wing flutters or from feather designs, and the Anna’s fits into the last category. It wasn’t until 2008 that an extensive study confirmed that it was the male Anna’s tail that made the sound, during his impressive display dive. 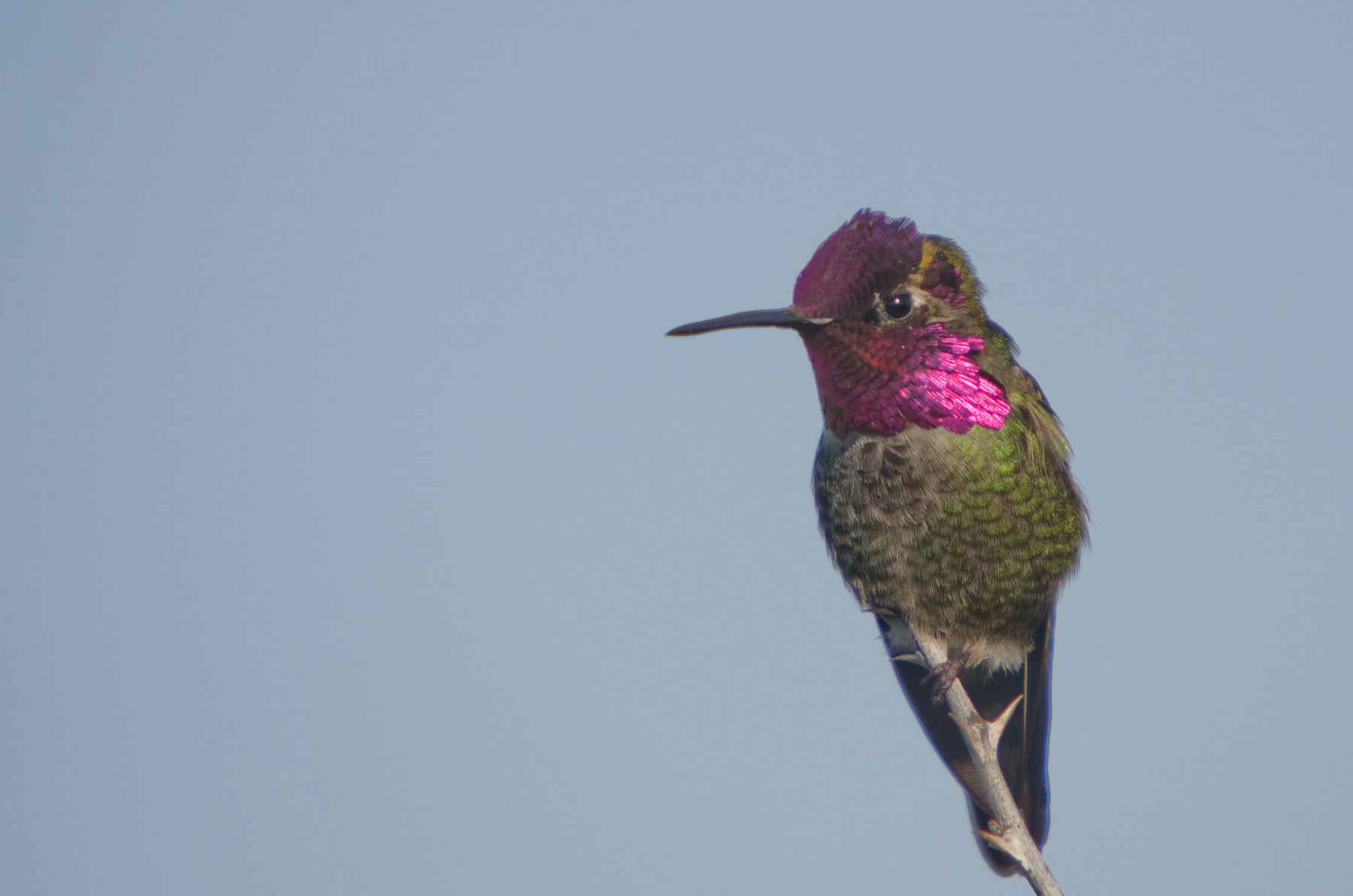 Using high-speed video, digital sound equipment and wind tunnel experiments, the researchers found that the outer feather—and particularly the trailing vane of that feather—vibrated or fluttered at a particular resonance (4 kHz) that produced the loud squeak. What they observed was when the male made its dive descent from about 30 m (100 ft)  it would briefly flare its tail ( ~ .5 sec) at the bottom. At that same moment, the sharp squeak was made lasting the same amount of time. They also noted that this sound (which is 4 octaves above middle C) could only be made when the air passing over the feather was greater than 19 meters/second (m/s) or 69 km/hr; below that value, there was no sound, while above that speed, it stayed the same.  The Anna’s males in the study consistently had dive speeds at around or just over 21 m/s or over 75 km/hr.

The tail squeak is much louder (18 decibels louder) than the Anna’s male complex song which also has notes in this range. The authors of the 2008 study theorized that the loudness of the hummingbird’s song is physically limited due to their size, so through evolution this mechanical sound developed to expand the male’s range of detectability and impact.  This finding has opened research into other species of hummingbirds having similarly modified tail feathers, and that the sounds created may be unique to each species. 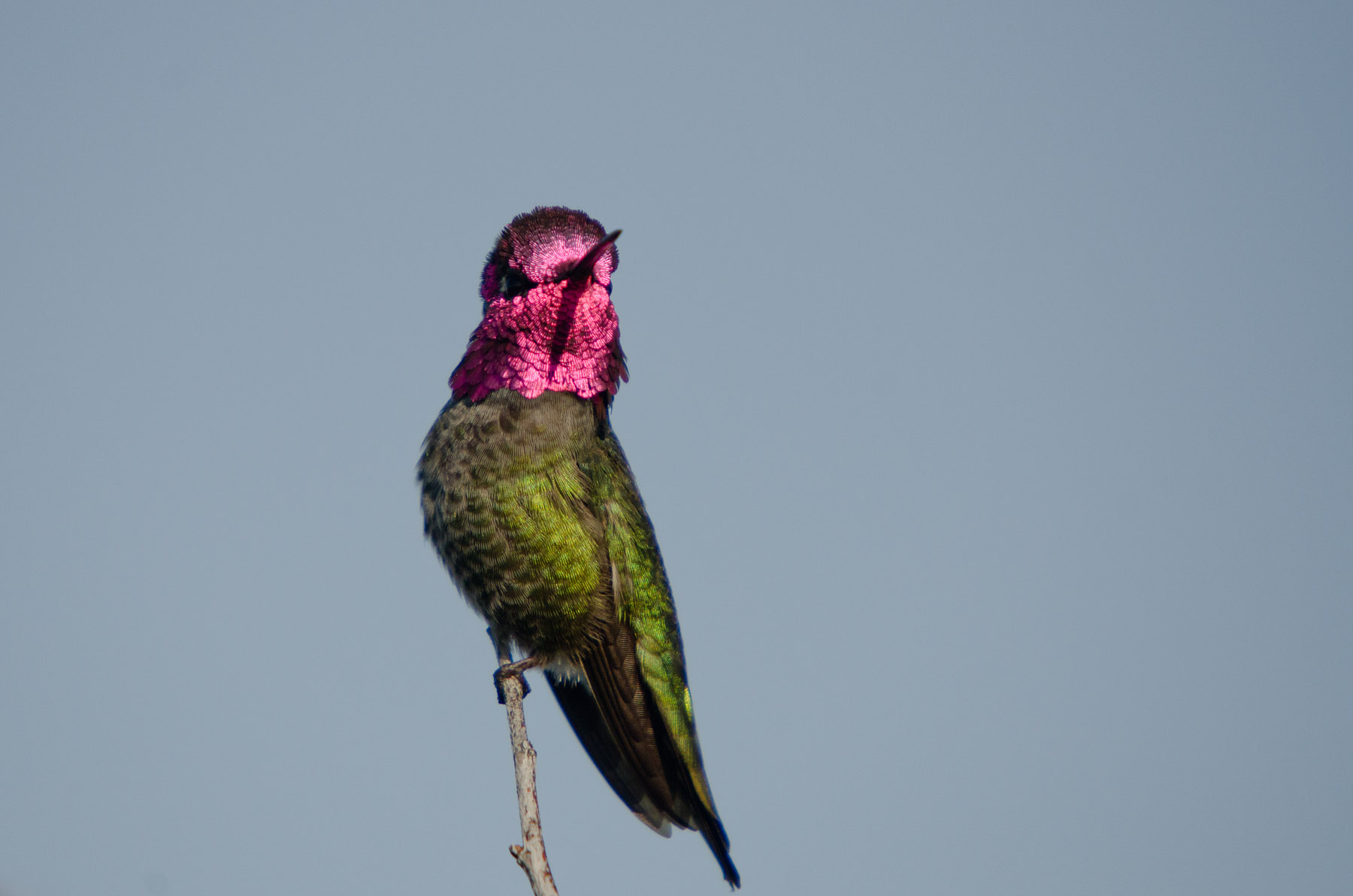 Knowing this now has really opened my eyes (well actually ears) to this different perspective on bird sounds. I am now more aware of the sounds of wings made by ravens, seaducks and pigeons as well as that wonderful ‘roar’ in the summer sky made by common nighthawks.

Always a pleasure to hear you explain things about Mayne Island and its flora and fauna.