Deb came to Mayne Island in 2007, initially as part-time seasonal resident. It was not long before island life got the better of her and she became a part-time Surrey resident, focusing her time on Mayne Island based initiatives.

Deb’s passion for community and for the health of the environment, made her a natural fit for the Conservancy Board of Directors, currently serving as Vice President, Chair of the Programs Committee, and Secretary of the Governance Committee.

Coming from a background in the Distribution and Retail Organic Food Sectors, Deb has brought with her a diversity of skills and a willingness to apply them where they best fit.

Alison moved to Mayne Island from Vancouver in December 2017. She and her husband found the beauty of the Gulf Islands suited their love of the quiet outdoors. A committed environmentalist and animal rights advocate, Alison took an immediately interest in the work of the Conservancy. Alison’s background is varied, she began her career in public television, and went on to work in a variety of small organizations, often taking on the role of bookkeeper, as well as her other duties, before starting her own accounting and software training business. Conservancy’s missions are in line with Alison’s dedication to environmental causes

Helen has lived on Mayne Island since 1998, a steward of one of the original Japanese farms and has been a director of MICS since year one. She has a MA in Children’s Literature, co-founded the Vancouver Storytelling Society and is the author of Fin’s Swim, a book about the Fraser River. Helen believes that through land conservation, mindful stewardship and education our planet will be a healthier place for all the life it supports.

Nancy lived on Mayne Island part time for 15 years before moving here full time in 2019. She joined the Conservancy board because protecting the ecology of the island is important to her, and she wanted to volunteer alongside others with similar values. Nancy has been an amateur bird watcher and nature-lover for many years.  Her work experience has been varied: she has owned and operated several small businesses, and was a school librarian for a period of time. As well as being on the Board, she contributes ideas and articles to the Oystercatcher and Mayneliner newsletters, regularly helps with Conservancy events, and enjoys meeting new members at the Saturday market booth.

Adrienne Brown is a Landscape Architect, garden designer and Mayne Island resident who believes in the importance of reconciling the biophysical aspects of a site with programming that addresses social and cultural requirements. The climate crisis has prompted her to better understand changes already occurring in the distribution of plant species in BC and threats to the quality of our soils.  Adrienne’s goal as a Director with the Mayne Island Conservancy is to help strengthen the human community, establish respect for and reciprocity with the natural world in all its glorious complexity, and to take advantage of the unprecedented number of opportunities for societal change we see today.

Sofia is currently a student at the University of Victoria studying Physical Geography and Environmental Studies. Sofia grew up in Norway and on the West Coast of British Columbia, developing a passion for marine and terrestrial species. During her undergrad she has focused her studies on permaculture and how ecological communities can co-exist with humans, particularly in regards to growing food. Sofia has spent the past few years working in Norway, Vancouver Island, and Galiano in the permaculture and restoration fields. She is hopeful her work will inspire others to get outside and learn about their environments, as well as practice sustainability within their communities. She also loves whales!

Katie is an avid nature lover with a background in ecosystem monitoring and restoration. She has worked in public education and outreach in a variety of environments, from Galiano Island to Rwanda, and enjoys working with diverse groups of people. After graduating from the University of Victoria with a BSc in Marine Biology and Environmental Studies, she worked with Parks Canada to manage invasive species and document Species at Risk throughout the Southern Gulf Islands. Katie is passionate about environmental stewardship and is incredibly grateful to live and work in the traditional territories of the Coast Salish First Nations.

Maddy is passionate about our beautiful planet and all it does for us. She has a background in ecosystem restoration and invasive species management and hopes she can do her part in protecting our home. Following her graduation from the University of Victoria with a BSc in Geography, Maddy worked for the District of Saanich in their Natural Areas section. Her work involved restoration, urban forestry, and managing invasive species. Additionally, Maddy has experience working with school groups and volunteers, with one of her favourite memories being a class of Grade 3’s singing, “I Will Survive” during a Chum salmon fry release. When not working, you may find Maddy digging in the garden or frequenting the forest with sticks in her hair and seeds in her pockets.

Categories: Board and Staff

Are you receiving the Oystercatcher?

We’re proud of our monthly publication. Please feel free to sign up. 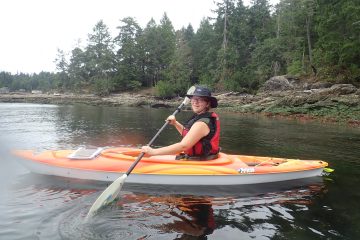 We are pleased to welcome writer Linda Jones with her first article for the Conservancy. Summer on Mayne Island always seems to fly by, and Jill Westby couldn’t agree more. A recent Environmental Science graduate Read more… 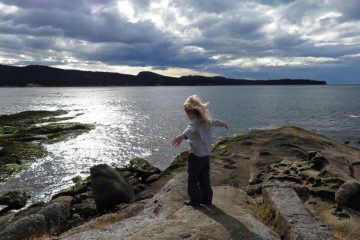 (Photo: Lee Beavington) Our annual report for fiscal year 2018 is now online, with photographs from the 2018 Photo Contest. Click here to download it in PDF form.