Looking out across sunny, cold Bennett Bay earlier this month reminded me of an unusual encounter I had two summers ago. Kayaking past numerous pairs of mother and baby seals lining the rocky edges of the islands, I saw a dark grey bird bobbing along, feeding on creatures hidden under the rockweed. Something was familiar about this very busy, horizontal-shaped bird with large yellow feet …Who was this creature and where had I seen it before?

Then I recalled another beach, another rocky shoreline, but lava this time.  Located just below the Kilauea Lighthouse on Kauai’s north shore is Kauapea Beach where I was submerged up to my neck in a deep, warm tidepool as the surf there made swimming treacherous. Around the corner came a grey shorebird with yellow feet, bobbing along, and after giving me a beady look, it flew a few yards away, making loud scolding noises. I stayed in that tidepool for a long time, and the curious bird came back for several more looks, peeking around the corners of the rocks. It was a very funny and memorable encounter, and now here, on the rocks of the Belle Chain, appeared the same bird. The Wandering Tattler was not known as a local bird, but when I reported seeing it to Michael Dunn, another keen-eyed islander had also spotted one on the north side of Edith Point. This fascinating bird now has pride of place on The Birds of Mayne Island checklist.

The Wandering Tattler is a distinctive shorebird with an elongated, horizontal posture, and has a strong grey bill, bright yellow legs, and long wings and tail. During breeding season it is dark grey above, and white with heavy barring below. Non-breeding adults and juveniles have dark grey uppers, paler below, with a greyish breast and flanks. Although their feet are not webbed, they are decent swimmers and can even swim as chicks.

These birds can be seen along rocky shores (or streams during breeding season), jabbing with their bills to catch invertebrates, steadily bobbing up and down. Tattlers also probe for food in sand or mud, flip over leaves, and capture passing insects by leaping after them. When startled, the Wandering Tattler gives a ringing trilled call, a series of clear, hollow whistles all on one pitch. A group of tattlers are collectively known as a “whisper” of tattlers, which is a strange choice given how loudly they scold!

The name “Wandering”, however, is appropriate as their range encompasses vast portions of the Pacific Ocean’s coastline. When they migrate, they venture out to spend the winter in a wide variety of habitats: rocky coastlines from North to South America, South Pacific island reefs, lagoons, rivers, wetlands, jetties, breakwaters and even golf courses on islands across the Pacific Ocean. These birds can be found as far away as Japan, New Zealand, and along Australia’s Great Barrier Reef.

Tattlers breed in northern B.C., Yukon, Alaska, and the Russian Far East in mountainous tundra cut by glaciers. They perform flight displays over streams and wetland sites upon arriving at their breeding grounds. The male rises up on trembling wings, singing while flying, and then adds interesting aerial stunts like slow-flapping, gliding, diving, hovering, undulating, and a stunning twisting dive for a finale. The flight display of the Wandering Tattler is one of the most impressive among shorebirds.

Both male and female birds incubate the eggs and raise the chicks, but females depart before the young fledge, leaving the males to care for them. Some pairs remain together during successive nesting seasons, but not all. Young tattlers feed themselves, following their parents along the edge of streams.

The Canadian Wildlife Service estimates the population of Wandering Tattlers to number around 10,000 birds, with half of that number breeding in Canada, although this number is difficult to verify given the birds’ wandering habits. Birdlife International holds the global population range from 10,000 to 25,000, with a population of 6,700 to 17,000 mature birds. This is based on a study done in 2009, but the quality of data supporting this estimate is somewhat flimsy. There is more accurate data to show that the geographic range of breeding and resident birds is 2.45 million km sq. and its non-breeding range is 103 million km sq.

The fact that Tattlers are widely dispersed across their breeding and wintering ranges probably helps their numbers to remain stable. The main threat to their survival is habitat loss due to climate change, and increasing shrub growth in the Arctic will reduce the open tundra habitats where they nest. Sea-level rise is also a concern, especially for their wintering areas.

Unlike the Buffleheads, which we learned about last month, Wandering Tattlers are not so easy to pin down: they don’t arrive en masse at specific wintering grounds like clockwork, and where they might turn up is not very predictable. So, as you explore any Pacific coastline from Mayne Island to South America, Hawaii and Australia, keep an eye out for these unusual, engagingly busy grey shorebirds.

Thank you for this in depth report. Interesting to know these can be observed at so many shorelines around the Pacific.

Thanks for your great articles! I’ll be keeping my eyes open for this bird. 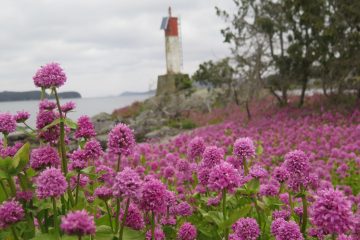