Have You Seen This Plant?

I moved to Mayne Island a short four years ago, and in my daily walks I quickly got into the habit of looking for some of the beautiful wildflowers and shubs that I had gotten to know in the Douglas fir forests of Vancouver Island. One of my favourites is the red-flowering currant, Ribes sanguineum. I have been surprised at how tough it is to find here. It should be dead easy to spot in spring, with its showy blooms gathered in a cascading cluster. The Latin name implies blood-coloured, but it’s really more of a magenta.

A glance at iNaturalist—a website where naturalists and nature nuts like me can register their plant and animal sightings—shows many records on Galiano Island. The Saanich Peninsula is full of sightings of this normally-common shrub. Here on Mayne, though, things are different: there’s but one sighting, on St. John Point. Why so few? It may be that our community is less active on that website—or, it may be because red-flowering current is highly palatable to deer. Red-flowering current is just one of the native plants that should be part of the natural mosaic of undergrowth here in the Coastal Douglas Fir ecosystem. Sadly, like so many other plant species, it appears to be anything but common here.

On my part of Mayne Island, there’s a single plant at the edge of East West Road. It clings to the rock-cut, facing northward—not a typical spot for a red-flowering currant, but an advantageous one in this case. It’s just out of reach of the deer who approach from below, and just a little too far down the ledge to be chewed on from above… well, that’s not entirely true. There’s a chewed stub where it has grown upward into the fallow deer’s browse zone. This one is destined to be a bonsai, I guess.

Here within my deer-fenced property, I have half a dozen young plants growing beautifully. I purchased two from the Mayne Island Conservancy a few years ago, and in the autumn I cut a stick or two of hardwood off them, about the size of a pencil, and just pushed them into the soil. Currants grow well from cuttings.

Hummingbirds are attracted to the beautiful red flowers, among the first to appear on the landscape along with salmonberries. These shrubs do produce berries—which my plant book describes as “edible but insipid.” Ethnobotanist Nancy Turner reports that Indigenous people traditionally collected the berries for eating fresh, though they were “not highly regarded.” I haven’t tasted them, as my plants haven’t produced fruit so far; with reviews like that I might just give them a miss.

Scottish plant collector David Douglas introduced the red-flowering currant to Europe in the 1820s after returning from adventures in the Pacific Northwest. At the time his employer, the Horticultural Society, considered this acquisition alone to be worth the price of his entire sponsored expedition. Red-flowering currant became a popular European landscape plant, as British garden writer Vita Sackville West noted: “Ribes sanguineum is a familiar sight in cottage gardens, where it may sometimes be seen clipped into shape as a hedge, and a very dense, pretty hedge it makes, clothed at this time of year with a mass of pink flowers.” In fact, most of the commercially grown cultivars available in stores today are descended from the seeds collected by David Douglas in the 1820s.

What a privilege to have a coveted garden shrub as part of our natural ecosystem here on Mayne Island. With luck and good management, it will be here for our children’s and grandchildren’s generations to enjoy, too.

Have you seen the red-flowering currant this year on Mayne Island? Please let us know in the comments below. If you’d like to see one up close, they’re blooming right now in the Conservancy’s demonstration garden in front of the Root Seller building in Miners Bay. (It’s a relatively small space so please don’t enter if someone else is in there during this time of distancing.)

Will any of these lovely plants be for sale when the Conservancy has its next plant sale ? I’d definitely buy one or two.

Hi Amber- We do have some available for sale. We won’t be holding a plant sale this spring, but you can contact Rob with your order and arrange pickup. https://mayneconservancy.ca/native-plant-sales/

My property was full of red flowering currents 20 years ago. Now, those that remain are in my fenced garden. The deer have eaten the rest. I find those in the garden self seed regularly and cuttings strike easily. I have tasted the fruit. It is dry and tasteless. I’ll stick to huckleberries, blackberries and even salmonberries.

We have a Red Current shrub on our property on Fernhill. Robyn Yeldon just sent us a photo of it in full bloom. Hopefully we can be there next year to see it bloom.

Have a nice one flowering on Bayview, 6 feet tall. Bought from the Conservancy a few years ago

We have at least one, large, planted by previous owners, here on Maple Drive. I’ve bought several, from the Conservancy, and tried my hand at cuttings as well. Hope to have more established here, by next year. The love, for them is so strong, I’m trying to replace the hedgerow, between us, and the neighbors, with native plants, including them, instead of Himalayan blackberries . 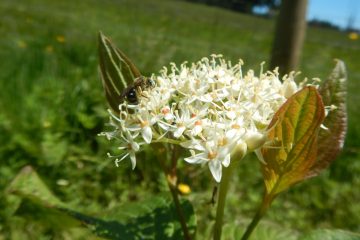