Editor’s note: we are delighted to present a series of articles by our own Michael Dunn, featuring the winter marine birds of Mayne Island. Be sure to attend Michael’s hands-on birding workshop on December 1st. 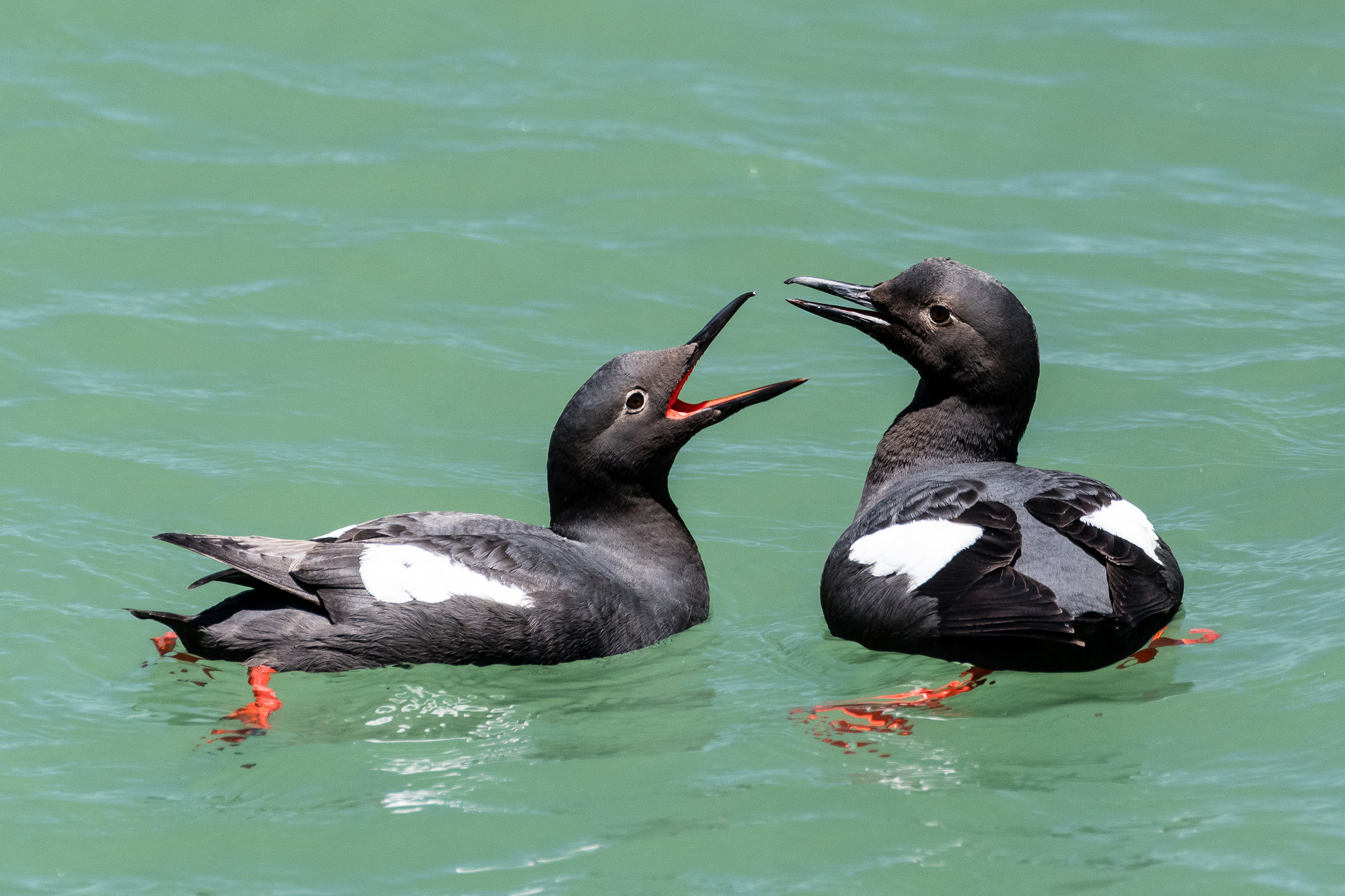 The Salish Sea—our home— is an important place for marine birds and shorebirds.

Did you know that twenty percent of all birds have seasonal movements, and most of these are north–south migrations that have been going on for millennia?

In order for birds to migrate successfully from their breeding grounds to their wintering grounds and back again, they need to be able to depend on the environment they find on their stopover sites. For example, the emergence of flying insects from breeding ponds, the melting of ice from lakes and streams, blooms of plankton, and spawning of fish are some of the predictable seasonal changes that migrating birds need to count on, at specific places along their routes. These places are not random, but located at intervals based on the abundance of resources, and the physical limits of a bird’s energy stores.

Years of research have identified many of these crucial places, and in our area the Salish Sea—our home— is an important place for marine birds and shorebirds that migrate up and down the Pacific Coast of North America (the Pacific Flyway).

The Salish Sea not only supports migrants who pass through, but also those species that choose to overwinter here and of course, our resident species. Mayne Island’s marine shores and surrounding channels and bays provide a large variety of habitats for these species and as such is a microcosm of the larger Salish Sea.

In our December 2017 Christmas Bird Count, we counted 42 marine or marine-associated bird species. This is almost half of the total species counted last year (83). These species fall into eight general groups that the marine environment supports. The eight groups included are Alcids (seabirds), Cormorants, Diving Ducks, Loons, Grebes, Shorebirds, Mergansers, and Gulls.

Very few birds fly underwater, but these birds do and are very good at it.

Alcids are diving birds, much like loons, grebes and cormorants. They have short wings for flying but uniquely they use them for swimming. Very few birds fly underwater, but these birds do and are very good at it. In the air, the short wings and the non aerodynamic body require that alcids face the wind and flap their wings and ‘run’ across the surface of the water to get lift off. Once off the water, they stay low and can attain relatively high speeds. Alcids spend virtually all of their life on the water and only come on land to breed. The alcid species seen around Mayne Island eat mostly fish, which they capture by pursuit. They are most commonly seen in the high-energy tidal channels, diving along the edges of upwellings and tidal fronts. They target forage fish (young herring, sandlance, sardines, etc.) as well as crustaceans at certain times of the year (particularly breeding season).

Alcids are known for their deep dives; even the smallest in our area (Marbled Murrelet and Ancient Murrelet) can dive to depths up to 30 m. The Common Murre, however, has a measured maximum depth of just under 200 m for a single dive. Their plumage is dense and waterproof while their bones are strong enough to withstand the deep-water pressure. Their metabolism is adapted for diving including the oxygen-storing capacity of their tissues.

Five species of alcids can be seen readily around Mayne Island in the winter – the Pigeon Guillemot (a resident seabird, here year round), the Common Murre, Marbled and Ancient murrelets and the Rhinoceros Auklet. Three are elaborated on here:

The Pigeon Guillemot (photo above) occupies rocky shorelines and headlands that offer suitable habitat for nesting and are close to areas that have reliable inshore feeding opportunities for its diet of bottom fish and invertebrates. This medium-sized species is unmistakable in breeding plumage, with its all-black body, bright red legs and mouth lining, and distinctive white wing patches. In the winter it’s less vibrant being dark gray above and white below. The guillemot uses both its feet and wings for underwater propulsion. They nest in loose colonies; in our area Matthews Point on Active Pass currently supports about 8-10 pairs of guillemots. 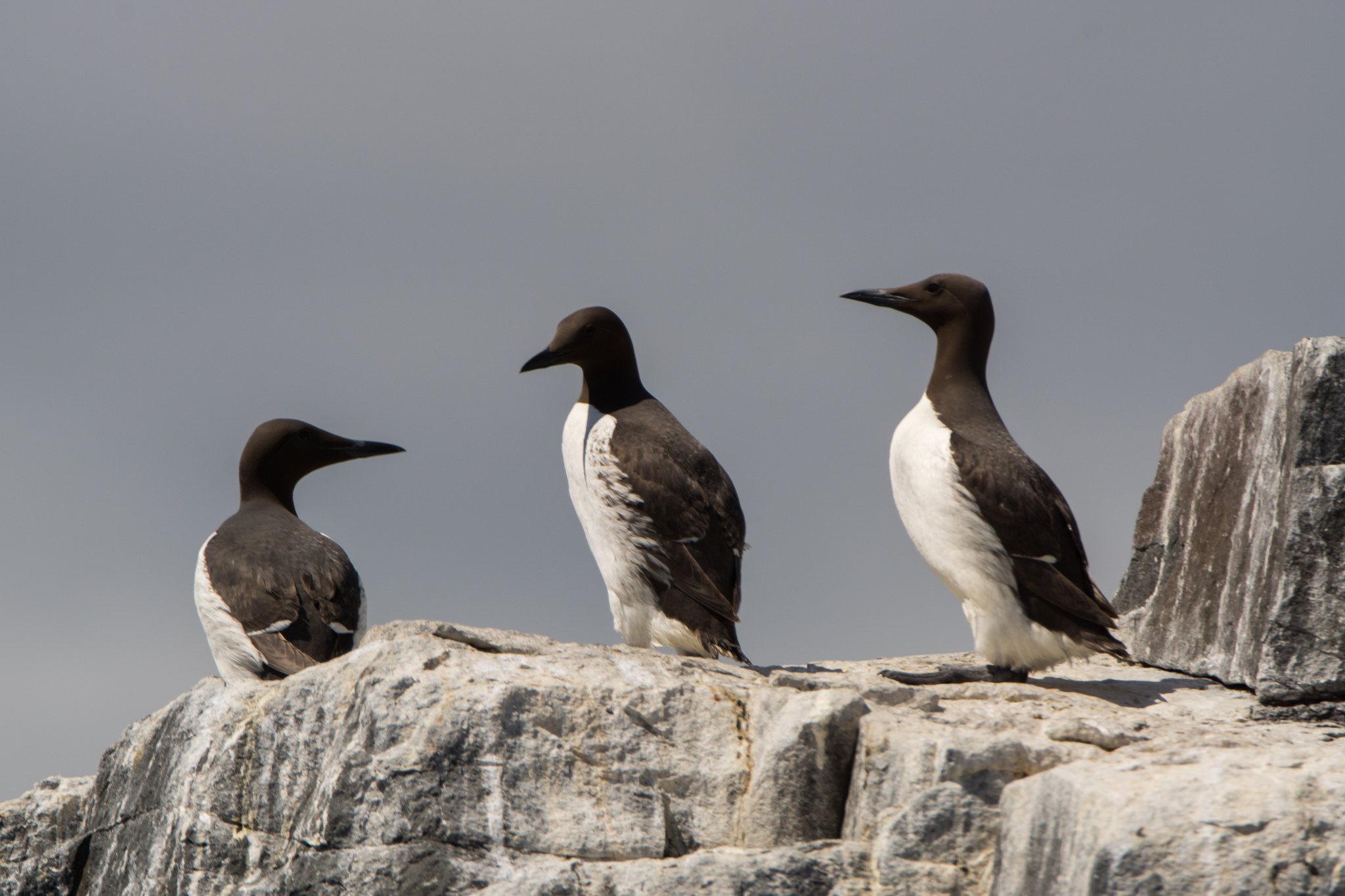 The Common Murre is one of the most widespread and abundant seabirds in the Northern Hemisphere, although uncommon as a breeding species in British Columbia. The nearest colony is found in Washington State.  The Common Murre is large, with a dark back and head and white underbody, and can be mistaken for a loon. It can be found in our marine waters in late summer when dispersing from breeding colonies and throughout the winter in Active Pass and Navy Channel. It is also found on the Georgina Shoals on the east side of the Mayne Island. Its diet consists primarily of fish with some crustaceans. Because of its wide distribution from inshore to offshore waters, Common Murres are the most frequent bird mortality from net fishery bycatch and from oiling in beached bird surveys in the region. 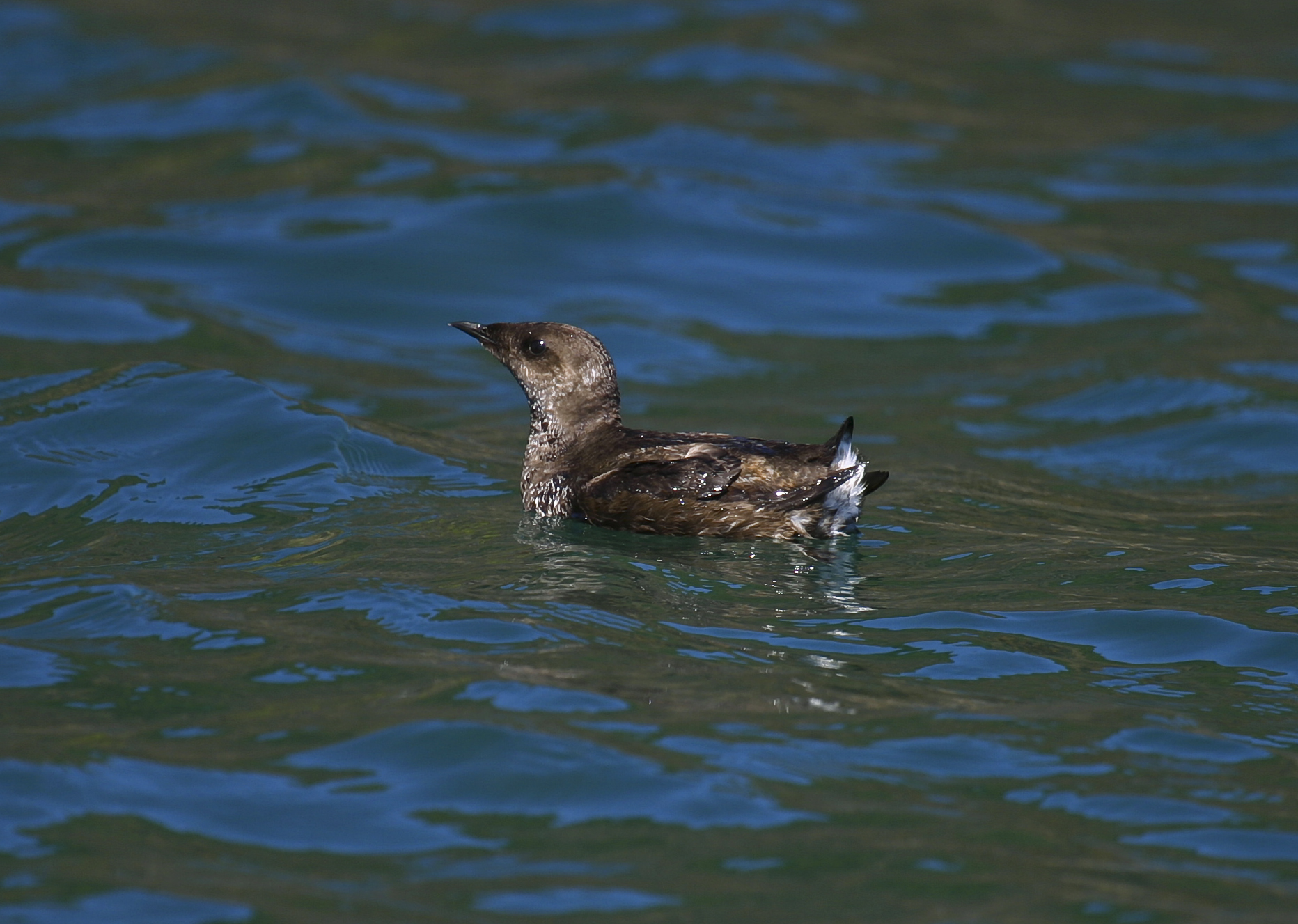 The Marbled Murrelet feeds in the same areas as the Common Murre and the  Pigeon Guillemot and targets the same species of forage fish. While less common in most years, it can be found feeding in Active Pass, Navy Channel and the Georgina Shoals.  In winter, this very small alcid takes on a classic dark above and light below colour pattern. In the breeding season it molts to a dark mottled brown colour, which is crucial for camouflage in its breeding habitat. Marbled murrelets are unique among alcids in that they are solitary forest breeders. Pairs remain together throughout the year, then fly to old-growth forests in the spring to nest on dense, moss covered branches high in big Douglas fir or other old growth trees. The nest sites can be up to 30 km from tidewater and the parents must forage and bring food back to the chick at night to avoid predators. Because they use old growth trees – which have become rare near the coast – their populations have declined greatly in historic times. Their population is still considered at risk because of low numbers and reduced breeding opportunities.

Please help us keep Mayne Island’s shores safe or our marine seabirds. For your year-end giving this year, support our Healthy Shorelines Now and Forever campaign.