After several weeks of  blowing winds and blinding sunshine, I was finally tempted to unleash my kayak from its summer parking spot and head out. Time to check on the 2022 seal pups and otter kits, and pick up any garbage from the islets off Bennett Bay, as has become my habit. Arriving at the beach I noticed all the visiting families with their paddle boards and inflatable unicorns had set up on the northeast end of the beach and the other end was deserted. Hmmm, curious, I thought…and “hmmm” is exactly what greeted me as I approached my kayak. An extremely loud HMMM in fact, as the top of the kayak was covered in yellowjackets and bald-faced hornets (also a species of yellowjacket). A kind islander had bravely ventured close enough to hang warning signs from the infested tree, but as a human who does not react well to the stings of these creatures, I kept my distance. After watching the hundreds of wasps in action for some time, I could not decide if they were nesting in the tree above the kayak, at the base of the tree behind the kayak, or actually inside the kayak! I considered whether I might return under the cover of darkness to free my boat from this prison, but having locked it to the trunk of the tree, decided it was far too risky.

Frustrated, I went home to research these animals and devise a plan of action. A few years ago after a particularly nasty series of stings, we decided to try the newfangled lime green pheromone trap in our garden. Boy, that certainly did the trick; every single yellowjacket nearby went into it and died. As an avid animal lover and Conservancy volunteer, though, this gave me pause. Sure, now I was not at risk of those flu-like symptoms following a sting, but what about the effect of the ecosystem? I’ve been trying hard to shift my humancentric view of things and imagine the world from animals’ perspectives. Easy enough with seal pups, swallows, and bees, but wasps?

I found a particularly useful and informative article in the publication, The Conversation. The author, Seirian Sumner, Professor of Behavioural Ecology at University College London, describes her experience studying wasps and learning how important and admirable these creatures are. She echoed my thoughts,  pondering our affinity for bees versus our fear and hatred for their relatives, wasps. She explains that wasps provide huge benefits both to the environment and to humans. They are avid predators: yellowjackets in nesting season consume 15 different kinds of insects including flies, ants, and spiders to feed their larvae. During non-nesting season when larvae numbers are low, the adults are herbivores, visiting flowers for nectar and thus acting as pollinator insects much like bees. Additionally, pharmaceutical scientists are exploring uses of wasp venom and minerals used in wasp nests for their medicinal and antimicrobial potential.

A little more time on Google, and I realised that my handy kayak is likely to remain under siege until heavy rains and cooler temperatures return, at which time the wasps will perish except for a few queens who will nestle in somewhere for the winter. Resignedly, I opened the cupboard to stash my kayaking gear, and something fell off the top shelf – a mesh bag with my snorkelling gear! I haven’t used this since a visit to Kauai many years ago and had forgotten all about it. How about taking my daily swim to a new level, downwards in fact, to explore under the surface of the water I could not paddle on top of for the next month or so? Sea stars, nudibranchs, pipefish, and what else might I see? Kayaking will return again by the light of the harvest moon, after the busy, industrious little terrors have finished occupying the beach at Bennett Bay.

Sparrow Wasps and their larvae are edible, a protein-rich steamed or fried snack. Wasps do consume other insects, some of which are cultivators’ foes. Wikipedia notes that in recent years Sparrow wasps from Korea and Japan (genetically traced DNA) have been found around the Lower Mainland and Washington State. If populations take hold, they will wipe out honeybees. I enjoyed your story, just an hour after I read up more about sparrow wasps! 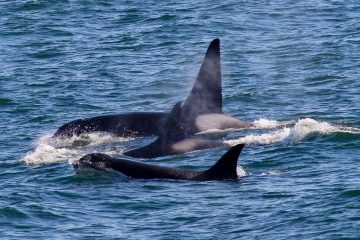 From Yves and Yvonne Tiberghien, Mayne Island One of our new resolutions for 2021 is to test the results of the famed Japanese technique of forest bathing, or shinrinyoku (森林浴). It is very simple: all you need Read more…