Many of you may have noticed or heard about the virus causing sea stars along the Pacific Northwest to waste away, known as Sea Star Wasting Disease/Syndrome. The virus isn’t new, but changes in ocean temperature and marine environments have resulted in mass die-offs of sea stars. One sea star that has been especially affected is the ochre sea star (Pisaster ochraceus). You’ve probably seen this sea star along the coast with their brightly coloured bodies ranging from deep purple to vibrant orange.

These stars are a dominant predator in the intertidal and are a keystone species in these ecosystems. Because they are such successful predators, they have significant impacts on many different creatures, like mussels, worms, barnacles, marine snails, and other invertebrates. By influencing the number and distribution of these organisms, ochre sea stars can completely change the structure of these communities (see diagram below).

When there is a variety of intertidal structure types (algae, mussels and barnacles), there is more habitat for different creatures. With the loss of ochre sea stars due to sea star wasting disease, we can see reductions in algae and invertebrate diversity, as mussels take over. Diversity is essential for an ecosystem to be healthy and sustainable.

There is good news still! Populations of ochre stars along the Pacific Northwest are starting to recover, and their intertidal influence is strengthening again.

I really enjoyed these articles about the sea and it’s creatures. Thanks

We are delighted you are enjoying them! 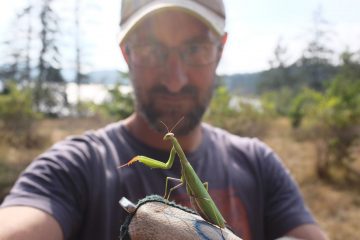