The Purple Martins of Mayne Island

Editor’s note: we are delighted to welcome Herbie Rochet as our guest writer for this post. Herbie and Bernard Rochet are Mayne Island’s stewards of the BC Purple Martin Stewardship and Recovery Project.

Among the beautiful sights and sounds of summer on Mayne Island are the aerobatics and voices of the western purple martin. The largest of the swallows to breed in North America, purple martins undertake an extraordinary migration from southeastern Brazil every spring to nest on this continent; they return to South America in the early fall after their chicks have fledged. Three groups come north to breed: a huge population east of the Rockies, a small population in the desert southwest, and “our” population of western purple martins in the Pacific northwest with their own subspecies name: Progne subis arboricola.

What do they look like?  The feathers of adult male martins are a deep, lustrous purple and black. The adult females are shades of grey and beige, with shiny purple highlights on their heads, shoulders and backs. Immature birds of both sexes look more or less like adult females during their first year. 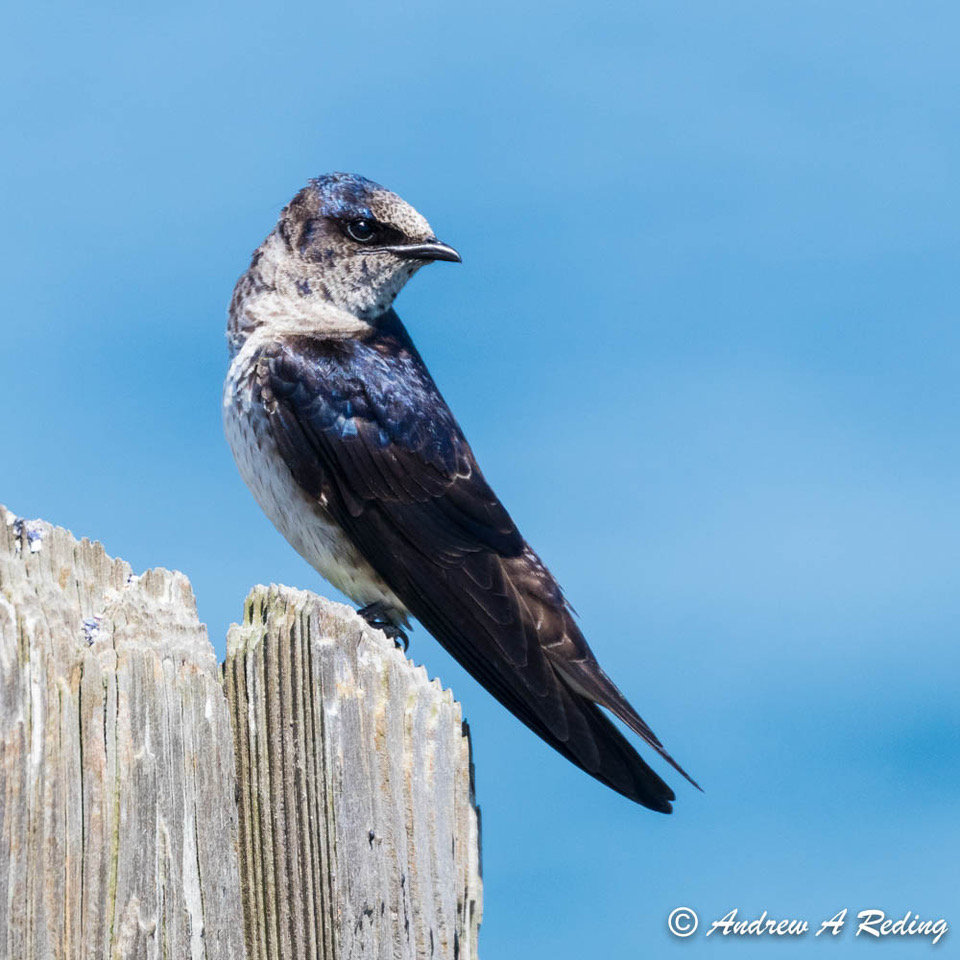 What do they eat?  Purple martins are aerial insectivores, and they especially love dragonflies, flying ants, beetles and moths. The sun and warmth of late spring and summer encourage “blooms” of the big insects the birds need to regain their health after migration, lay their eggs and feed their young. But, their food preferences and the fact that they feed on the wing makes them extremely vulnerable to weather events that jeopardize their food supply.  Only two or three days of cool, wet or windy weather can push insects out of the air and put the martins at serious risk of nesting delay, nest failure or chick starvation. 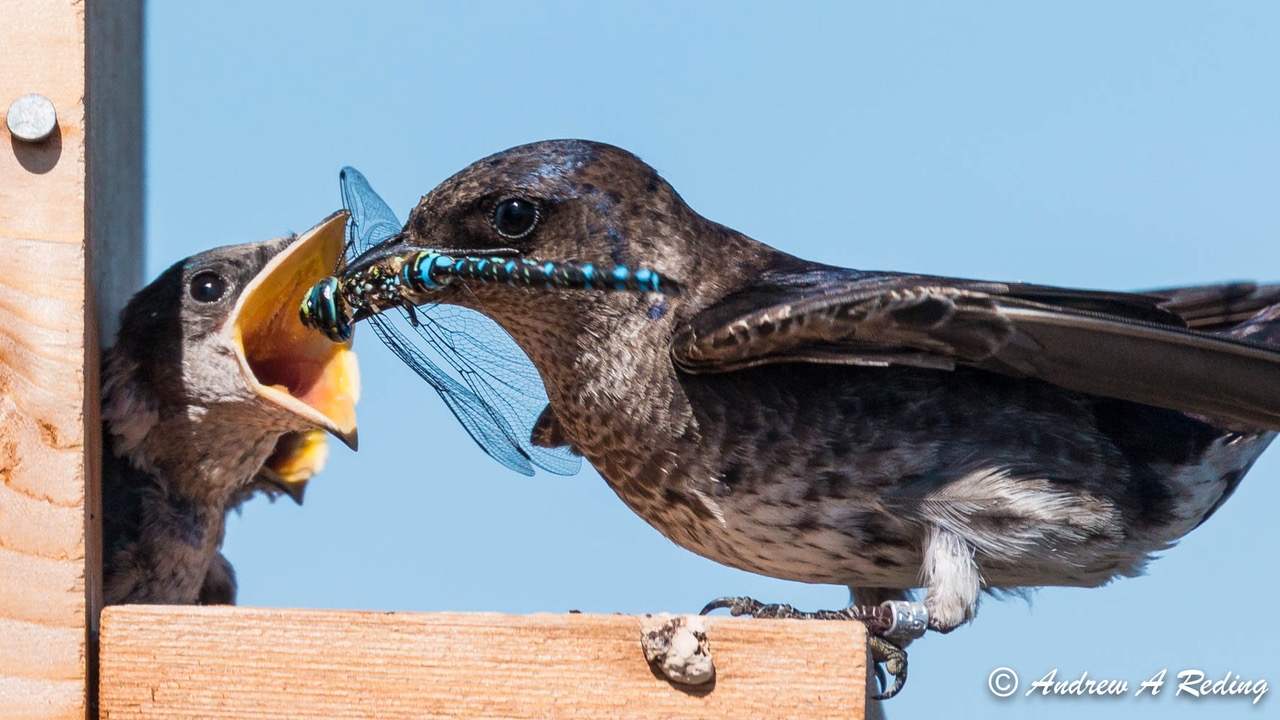 Do they sing? The males have a beautiful liquid song, and both sexes produce a delightful “chortle.” Click here to listen. (Sound file by John Neville)

Where do they nest? Purple martins are colonial nesters and dead-tree-cavity specialists. They prefer open, fire-killed, dead or dying tree stands and Garry oak parkland in shoreline areas, where natural cavities and abandoned woodpecker holes are available. But that habitat is rare these days. Martins used to be abundant on the west coast, but their numbers declined drastically in the middle of the twentieth century due to habitat loss (e.g., wildfire suppression, dead tree removal, agricultural & urban development), changes in building design (fewer nooks & crannies) and competition for any remaining nest cavities from starlings and house sparrows (which don’t migrate & nest earlier). By 1985, there were as few as five breeding pairs left in BC, nesting in rot pockets in old marine foreshore pilings. Fortunately, a nest-box project came to their rescue: the BC Purple Martin Stewardship and Recovery Program coordinated by the Georgia Basin Ecological Assessment & Restoration Society (GBEARS), with support from many sponsors and volunteers.  Since 1985, more than 1500 nest boxes have been installed on pilings over or near the water in the southern Georgia Basin.  Eighty active colonies now exist on the east side of southern Vancouver Island, in the Gulf Islands and on the coastal lower mainland, and as of 2015, BC’s western purple martins numbered more than 1,000 breeding pairs.  Even with this success, however, and the occasional instance of martins finding nest cavities in natural or foreshore structures, they remain blue-listed (“Species of Special Concern”) on the west coast of Canada and an “At-risk Species of Special Concern” in the northwestern U.S.  Their preferred natural wild-fire successional habitat has essentially disappeared; the nest boxes are all they have now. 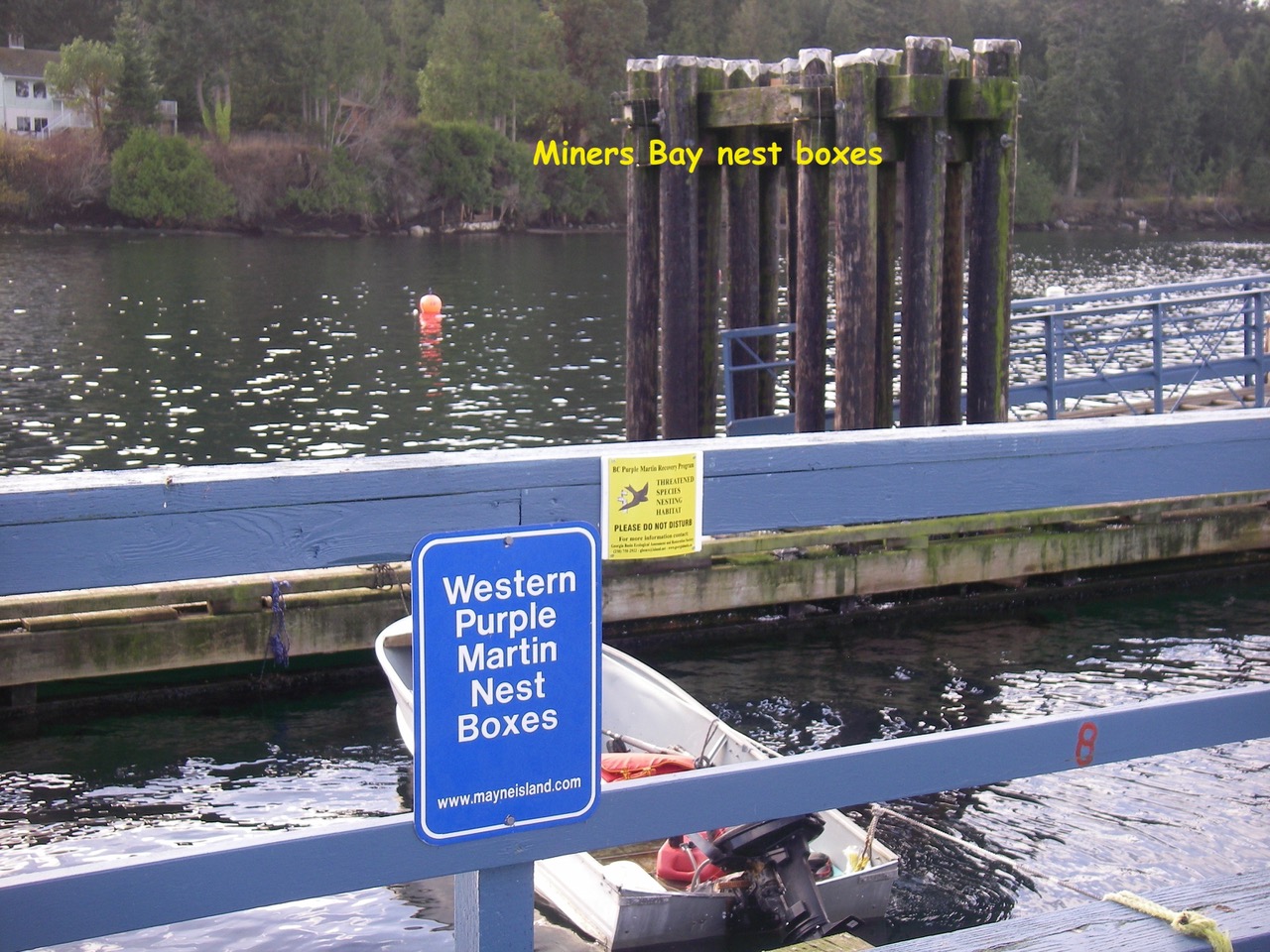 So where can you find them on Mayne?  We have two colonies: 10 nest boxes in Bennett Bay, mounted on isolated pilings in the water beside the Mayne Island Resort’s pier, and 10 boxes on the Miners Bay dock above the south floating platform.  Both colonies were started in 2006.  Occupancy rates are usually 100%, and chick production averages 65 annually. Western purple martins prefer single nest boxes clustered together rather than the apartment-style houses used by their eastern cousins.  A wire canopy above the box entrance serves as a guard against predators (gulls, crows, ravens & herons).  Local stewards clean and close the boxes in the fall and open them again in the late spring when the martins start to return. 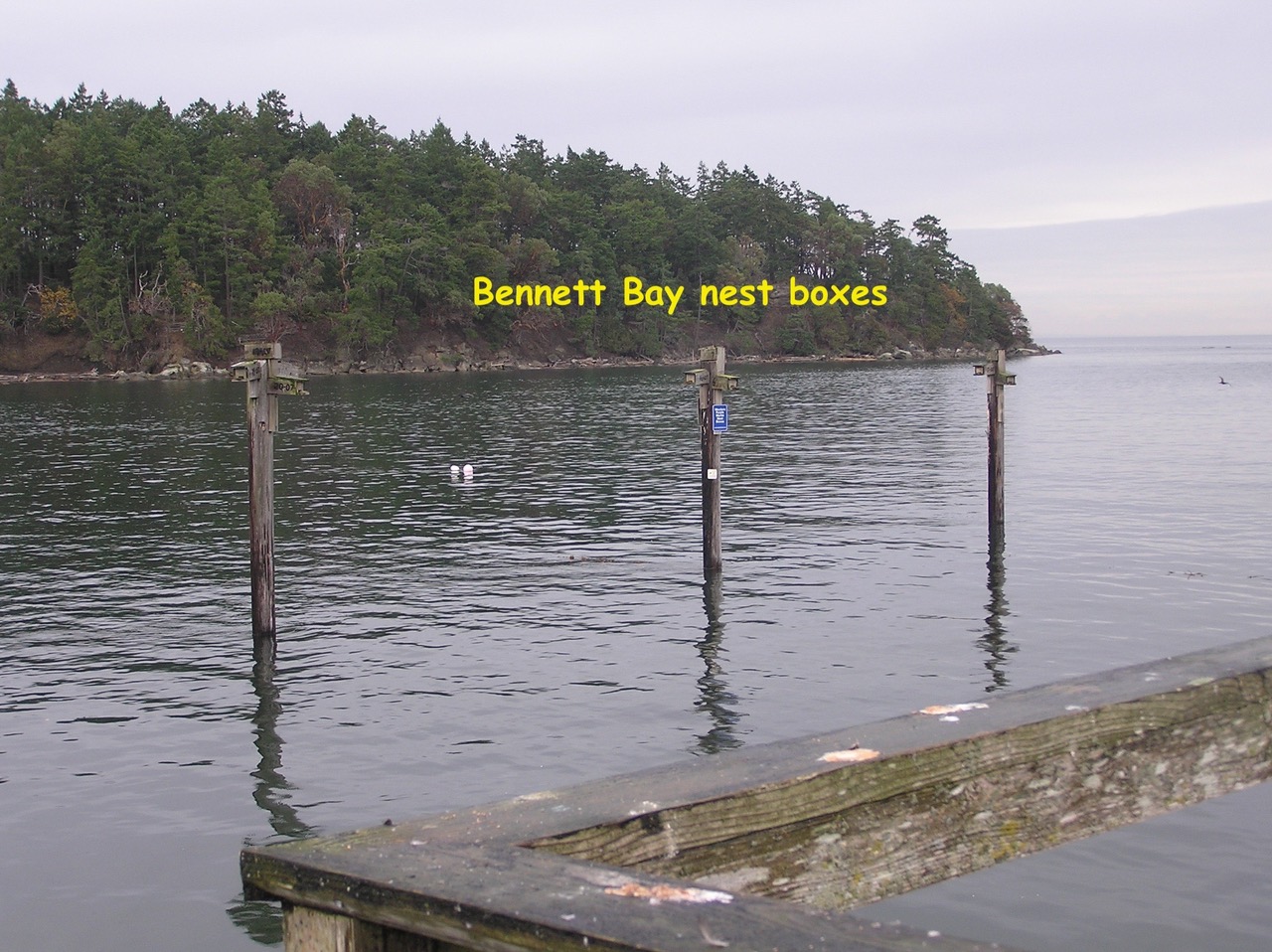 Are you interested in providing more housing for our purple martins? Do you have open foreshore areas/structures that could accommodate nest boxes (at least 3)?  Or do you have a freshwater pond or an upland property with open habitat where nest boxes could be installed?  If you’re thinking “yes,” then become a volunteer steward in the BC Purple Martin Stewardship and Recovery Project!  Visit the GBEARS website (www.georgiabasin.ca) and click on “projects” to appreciate its scope. And for information about getting involved in the project on Mayne, contact local stewards Herbie and Bernard Rochet (rochet@shaw.ca). 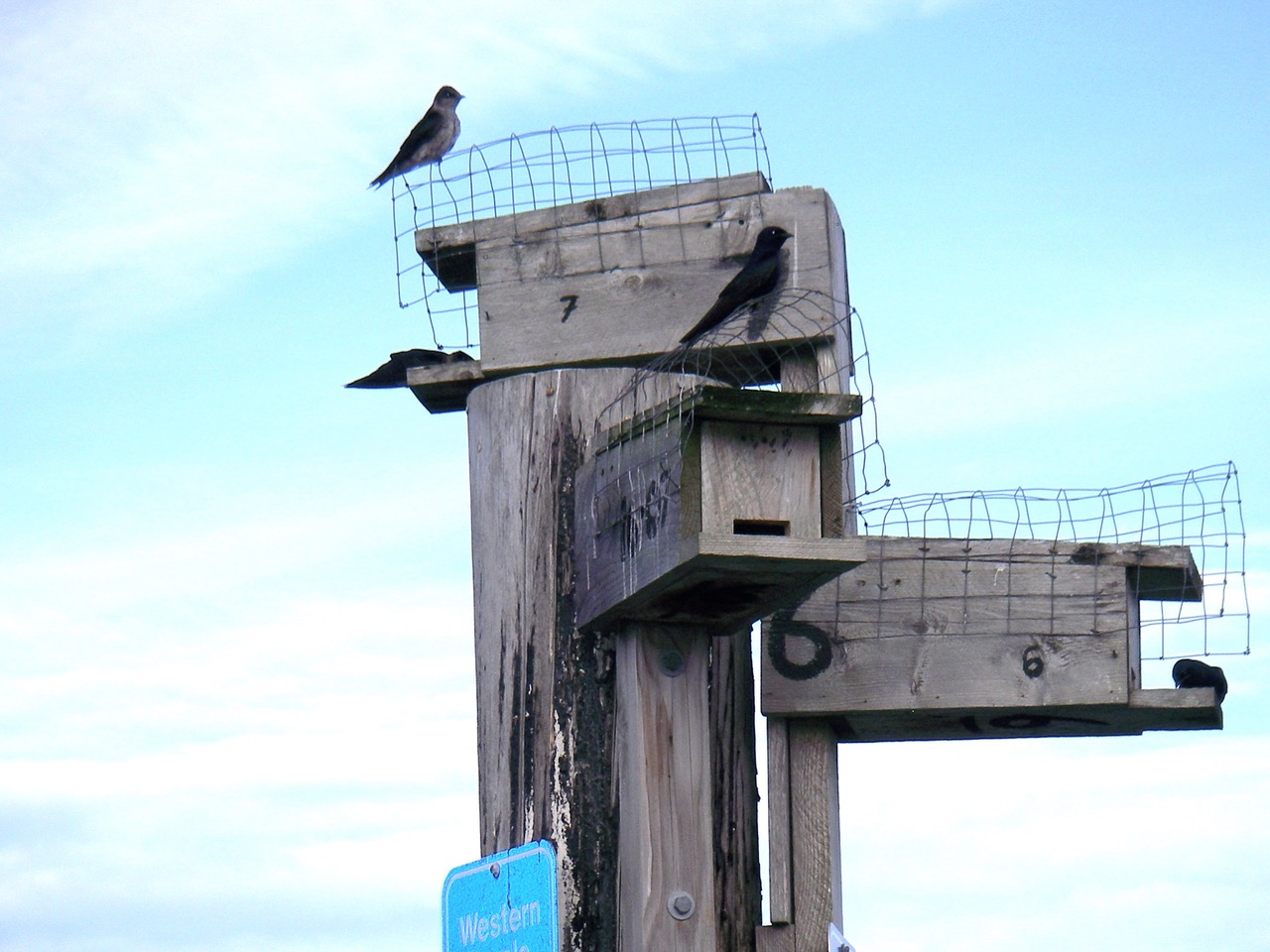