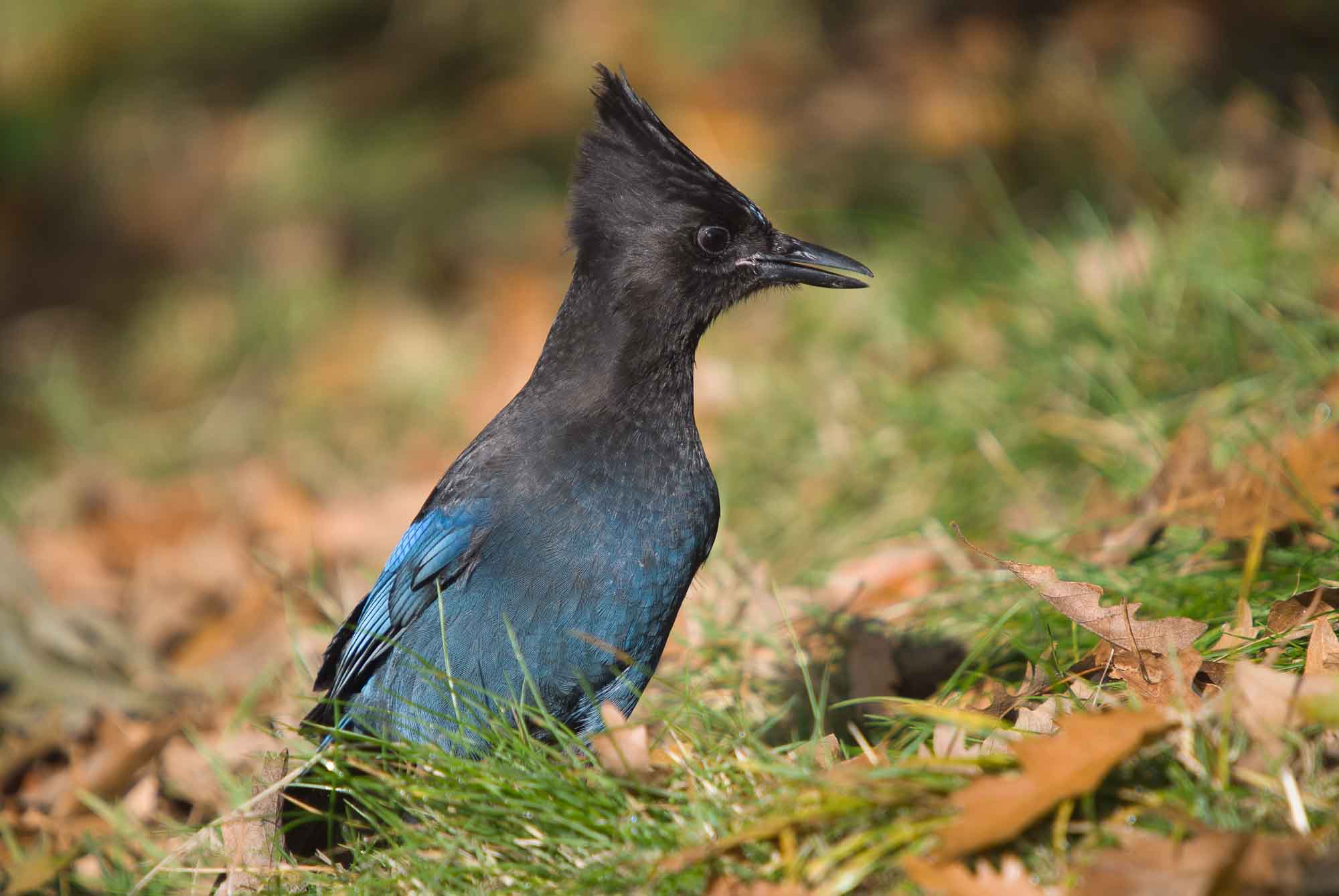 What’s up with all the Steller’s jays?

When I was young and growing up in Victoria, I recall late summer and early fall months when Steller’s jays were everywhere around my neighbourhood. I lived very close to Beacon Hill Park and knew then that the Garry oak acorns were ripe (we used them as projectiles). I found out later that the jays liked to harvest and cache the acorns for future use.

To me at that time, the appearance of Steller’s jays was a harbinger of fall.  What I did not notice was that some years jays were very common and other years not so common— or not seen at all—and this cycle occurred at intervals. These super abundant years are called irruptions.

Certain bird species have very successful breeding years, which stresses the limited food supply. So the young of that year move to more favourable areas, sometimes well outside of their normal range. (Snowy owls are one such species in which this occurs.) For the Steller’s jays in the Victoria region, since records have been kept (1913 to present), there have been about 12 irruptions at varying intervals. Before the 2017 event, the largest one was in 1992 when the Canada high for a Christmas Bird Count was recorded at Victoria (659 birds) and the highest provincial total ever recorded from all counts (3,251) also occurred. As a result of the 1992 event, research was done on the movements of Steller’s jays within their range and the possible mechanisms that contributed to irruptive years. These studies added to what was already known, but in some very interesting ways. 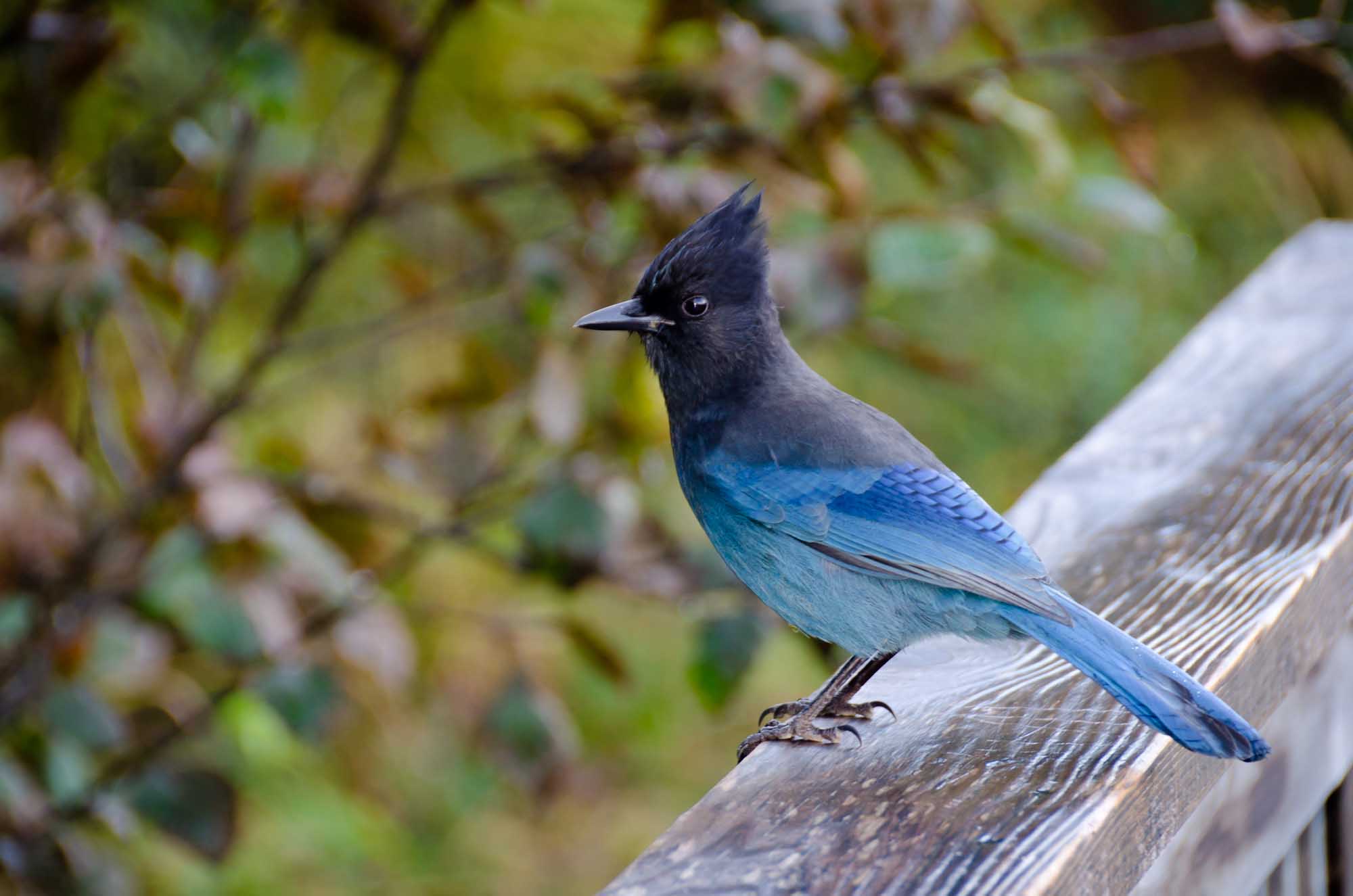 Steller’s jays are found throughout much, but not all of BC. The highest populations are concentrated in the Georgia Depression (southeast Vancouver Island and the Fraser Lowland) and western Vancouver Island. Banding studies identified that there is both a north-south migration of jays from their breeding grounds to wintering areas, and a migration from higher elevations to lowland areas. These movements augment the year-round populations in these places.

A key finding of both banding and observational studies during this time was that Steller’s jays do not like to cross bodies of water, so that marine channels such as the Strait of Juan de Fuca (24 km) and Haro Strait (11km) represented significant barriers to the migrant populations. When these jays were faced with crossing, they instead chose to disperse into the surrounding available habitats and overwintered there.

Another factor in occasional irruptions was high breeding success and abundant food supply before fledging, combined with a reduced food availability for the fledged birds. In these cases, the resident adult birds would prioritize their own survival over their offspring, and forage for themselves. This effectively drove out juveniles to other areas for feeding. The vast majority of birds of the irruption years are young of year, and records indicate that these birds begin their movement in August through September. Here on Mayne Island, we began seeing the jays in August as small flocks of 4 to 8 birds. Later in the fall these flocks dispersed throughout the region and gave the appearance of being less common. This dispersal is generally to riparian corridors—areas along waterways—and residential areas of the lower elevations. Our bird feeders, with the appropriate food, would support this residential dispersal.

What other factors would have contributed to this unprecedented number of Steller’s jays on Mayne Island this year? One that has been put forward is the extreme and early wildfire season in the summer range for Steller’s jays in the interior of BC.  As the fire season began in May, 2017, with active fires continuing until the fall, it is likely that these fires would have disrupted normal breeding post-breeding dispersal, and migration. 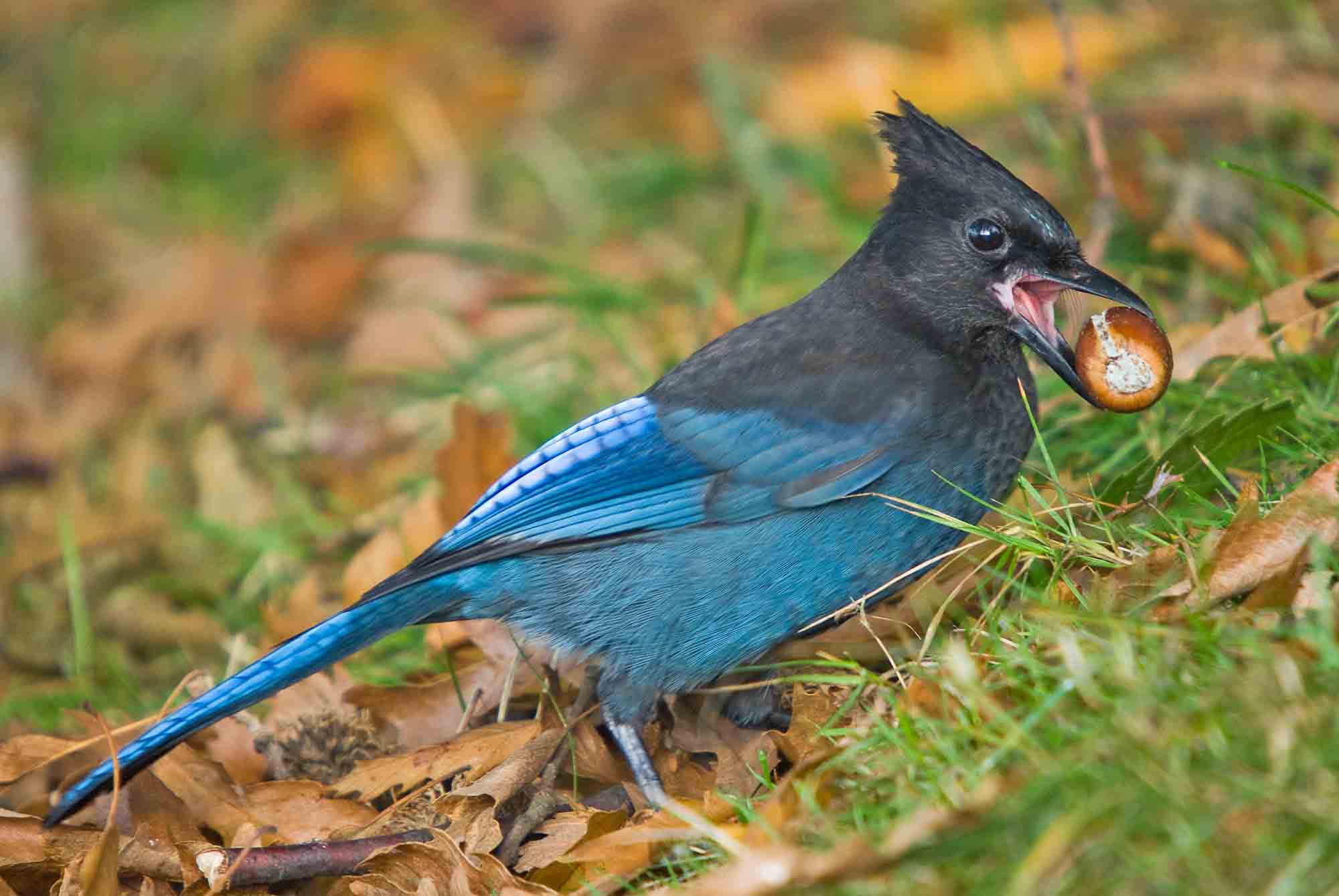 It doesn’t just happen here in BC: fires in northern California were also implicated as constraining the dispersal of birds, and forcing their movement into other areas. Studies in California and surrounding states (2002-3) indicated that a combination of fires, drought and beetle kill of trees was causing a widespread redistribution of Steller’s jays (and other jay species) to lower elevations.

Another, more compelling factor for our region (and supported by the California studies) is drought. Over the last few years, southern and eastern Vancouver Island, particularly at higher elevations, experienced drought which meant lower than average snowpacks and hot, dry summers. The result is an early flush of available food for breeding jays and their young during the spring (Steller’s Jay young fledge 20 days after hatching). After that, the lack of significant rainfall affected the abundance of food for the fledged young and they needed to move elsewhere.

Before 2017, the highest number of Steller’s jays ever recorded from over 50 years of Mayne Island Christmas Bird Counts was two. As you might have guessed, that was in 1992; the time of the last large irruption. For comparison, the 2017 count on Mayne recorded 19 Steller’s jays —the highest number ever. It also suggests that the channels between our islands may be below the threshold that jays will cross. As I write this, I know that there are still a few Steller’s jays on Mayne Island, and we are nearing the start of the breeding season.  It would be a wonderful addition to our bird population if we were to have our own resident Steller’s jays.

A couple of weeks ago one the lower end of Seaview, just past the intersection with Fernhill I saw 2 Stellars Jays. It was a one time sighting for me but I wonder if Harry or Mike may have noticed them around their places

There is a family living In the grove at the corner of Fernhill & Seaview. Clearly heard them chattering, spied one up it a tree. Hope they are nesting there!

Same pattern on Galiano Island this past year. Steller’s jays showed up in August and we recorded 26 on our Christmas Bird Count. There are still some jays around the island today.

Thanks Michael. That is very interesting. I have seen them at the back of my house on the upper side of Dalton Drive.

We’ve got at least one still hanging out at our place as of the Easter weekend. Near the ferry terminal.

We’ve got about 4 at our end of Wood Dale.
Harry Lane doesn’t have email, so I’ll fill in for him. He also has at least 4 at his place on Seaview.

Show us a graph of bird species populations over time (specifically the jays), then everyone knows the numbers and can react! Thanks for that graph.