Hornets in the news

In September 2019, a nest of Asian giant hornets was destroyed near Nanaimo. This spring, with pandemic-induced anxieties running high, the New York Times published an article dubbing this invader the “Murder Hornet” after a honeybee hive was decimated in Washington. Unfortunately, this sensationalistic media reporting might be harmful to other important native species of similar insects. In fact, unless you are a bee, experts say there is no need to fear them.

In this article, you can expect to learn more about the importance of different local wasps and how to differentiate them from this potential invader. You might also learn why “Murder Hornet” is an unfortunate misnomer.

Wasps contribute a very important ecosystem service as predators. All wasps hunt live prey, some of which are considered pests to humans. Flies, caterpillars, spiders and other bugs are on the menu. Yellowjacket species will also contribute to decomposition by scavenging meat from carcasses. However, adult wasps are not carnivores, they use these food sources to feed their larvae. Adult wasps will consume sweet liquids like nectar and juices from fruit. They also contribute to pollination, although not as efficiently since their bodies are not hairy like bees. Because wasps are not as picky with flower choices as their cousins, they are thought to fill a gap by pollinating a broader range of plants.

The common name “wasp” is given to many different types of flying, buzzing, often stinging insects. They are related to ants and bees who share the common physical feature of a narrow “waist”. For the sake of this article, we will narrow our focus to those commonly encountered in the Southern Gulf Islands and who might be mistaken for the Asian giant hornet. Most of these are within the vespid family and, like bees, have stingers which are ovipositors modified to deliver venom. Some of them are eusocial while others are completely solitary.

Eusociality entails a complex colony involving division of labour, cooperative brood care and a single egg-laying queen. Most bees are also eusocial, although they build their hives with a wax. Vespids use a paper-like substance they produce by chewing wood and mixing with their saliva. Interestingly, colony size is an important determinant of aggressiveness. Species with smaller colonies will not risk losing a worker as opposed to larger colonies that can send out soldiers to defend the nest at more minor provocations.

The most common group of wasps encountered are yellowjackets. They build their nests in the ground or structures and create large colonies of hundreds or even thousands of individuals. They are the only group that will scavenge for food in addition to hunting live prey.

With such large colonies, they can afford to be more aggressive and are easily provoked if their nest or food is disturbed. These wasps are common uninvited guests to picnics and outdoor social-distancing dinner parties. This is especially true late in the summer and early in the fall when food is scarce, and the colony is fostering reproductive individuals as opposed to infertile workers.

Common names can sometimes lead to confusion when classifying different species. For example, the bald-faced hornet is not a true hornet. In fact, there are no native hornets in North America. It is one of two species of aerial yellowjackets commonly found on Mayne Island. It is easier to identify as it is mostly black with white bands on the tip of its abdomen. The Northern aerial yellowjacket is difficult to distinguish from Vespula species, although it is slightly larger. This group of wasps is similar to yellowjackets, but they hang their nests on branches and other structural projections. Areal yellowjackets will defend their nests although they are not as easily provoked.

Paper wasps are slenderer than the above species. They create much smaller colonies than yellow jackets, often no more than 50 individuals. They build their nests without an outside envelope under covers like decks, stairs or rocks and bark. Paper wasps are not very aggressive and prefer to stay away from humans.

Wasp traps consisting of a one-way entrance with sugary liquid attractants can be very effective… Almost too effective! Please use these as a last resort, and only leave them out when you are also out. Temporary open baits such as a fish head or empty jam jar might be enough to reduce the nuisance during a picnic.

The Asian giant hornet is a true hornet common to Asia’s eastern coast. It is the largest of all eusocial wasps and at the top of the insect food chain. It is an incredibly effective bee predator able to eradicate a whole colony in very little time. Although only a few nests have been detected and destroyed in the Pacific Northwest, conservation organizations remain vigilant. Here is more information on how the province is managing its spread.

Asian giant hornets nest in the ground and are most likely to be spotted during the summer months while mature females travel away from their home to establish their own, looking for high-protein foods to sustain them. It prefers a marine climate, and Mayne Island is a potential location where it may spread.

Currently, their low occurrence should not be of concern to humans. They are fierce predators, but only attack when their nest is disturbed. Even when disturbed, the colony only sends out one or two soldiers. So, unless you continue to pester them, there is no need to fear a swarm of scary wasps. The few dozen deaths reported in Japan were unfortunate instances where someone is stung repeatedly due to their more powerful venom. These are very rare cases in a place where the hornet is much more common.

In the diagram above, the common wasp species found on and around Mayne Island are in the top right. The other species are there for comparison or because they might be uncommon encounters. A European hornet (see diagram, far left) was found this summer on Mayne Island, the first recorded in BC. The invasive species was introduced on the East Coast, but has yet to establish here.

Unnecessary fear towards beneficial insects can be detrimental to an ecosystem. Although the chances of finding Asian giant hornets on Mayne and in the Southern Gulf Islands are low at the moment, we should still remain vigilant. However, a better understanding of vespids could be the difference between irrational fear and critical vigilance. If you think you have found an Asian giant hornet or European hornet, please report directly to the Invasive Species Council of BC (1.888.933.3722) or on their website https://bcinvasives.ca/report.

Would you like to receive monthly updates about the flora and fauna of Mayne Island? Sign up for our newsletter The Oystercatcher below.

This is a great article and very informative. I hope it’s okay if I make a suggestion. I’m particularly interested in all wasps and hornets because of my anaphylaxis to them. I’m particularly sensitive to vespids which include paper wasps. Paper wasps like to stay to themselves but if you accidentally disturb their colony, they will go after you and sting you several times which will in turn attract the others in their colony towards you. I had a severe reaction to a paper wasp in 2009 when I was trimming federal jasmine and accidentally touched their colony not knowing they were there. My instinct was to run because I needed to inject myself with epinephrine but that one paper wasp had stung me several times on my forehead. Here’s my suggestion: I wonder if next time you publish an article on wasps and hornets it might be worth mentioning that disturbing paper wasps can cause them to go after you. Thank you. Barbara

I really hate to kill paper wasps because they are so docile. One year I had been coming and going daily through a shed doorway with a little porch eave, never noticing a growing colony until the nest was about six inches in diameter, less then two feet above my head. When I finally saw it I kinda froze in shock with at least a dozen wasps eying me back. So surprised I had not noticed it. Couldn’t bring myself to exterminate them so I started walking around to the back door to come and go until cold weather killed them off. 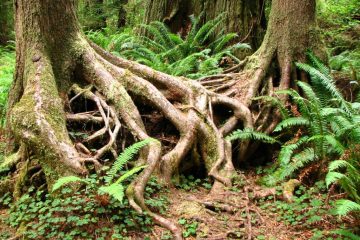 Soil Life: The Hustle And Bustle Below Our Feet

This is part two of the “Below Our Feet” series. This series of articles aims to shine a light on the mysterious underground world of plant life beneath our feet. In the last article, we Read more…