Western Screech-owls are small owls with yellow eyes and tufts over their ears. Their feathers range from grey to brown and have dark wavy lines, creating a streaked appearance. Their calls include trills and have been likened to a bouncing ball. These owls have declined in numbers due to loss of habitat. They require snags or wildlife trees for nesting, many of which have been removed for logging, agriculture or development. They are not common on Mayne because of their preference for riparian areas (areas adjacent to wetlands and streams) as habitats. To help provide habitat for these owls, we need to preserve riparian areas and refrain from cutting down wildlife trees and snags. 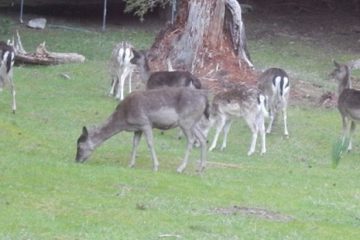