The water is like a dark flat mirror, and I can almost feel the first rays of the sun waiting to dash over the horizon. For now, the bright light of day has yet to disturb the quiet of the pre-dawn. My kayak lies before me, straddling the ocean’s edge and rocking gently in the nearly imperceptible waves breaking along the muddy shore. As I adjust my life jacket and spray skirt, I reflect on the task ahead. I complete a safety check and make sure all equipment is accounted for and secure. The job today is monitoring bull kelp. The site I’m heading for has been visited each year for twelve years, soon to be thirteen. I check the time and note my survey window is nearing; it’s time to get on the water.

The Mayne Conservancy was proud to coordinate another successful year of bull kelp monitoring in 2022. Four community organizations participated in the long-term monitoring program this year: the Mayne Island Conservancy, Galiano Conservancy, Pender Islands Conservancy, and Saturna Island Marine Research and Education Society. In past years, the Valdes Conservancy has also contributed. Working together, these five groups complete an annual monitoring program known as the Southern Gulf Islands Bull Kelp Monitoring Collaboration, which involves staff and volunteers from across the islands documenting the surface extent of 17 bull kelp sites totaling 32km2 in area. In 2022 there were 27 surveyors who collectively invested 296 hours to complete the surveys, which are done during low tide (<1.2m). These surveyors were recruited and organized by local coordinators on each island, with staff from the Mayne Conservancy providing in-person training and managing collected data into a central database.

Long-term environmental monitoring programs are essential for detecting and understanding changes in the environment. Marine monitoring is particularly important because what happens in the ocean often occurs out of sight. In recent years, long-term monitoring of bull kelp in British Columbia has helped scientists understand the dynamic relationship between marine heat waves, sea star wasting disease, sun stars, sea urchins, sea otters, and bull kelp. Sun stars and sea otters eat urchins, and when both predator species are absent, the urchin populations increase and eat all the bull kelp. This transforms an ecosystem that is otherwise rich in diversity and function into what is known as an urchin barren. The marine heat wave in 2014-2016 helped create the conditions for sea star wasting disease, which had a big impact on sun stars. The heat wave was also observed to have a direct impact on the growth of bull kelp in warmer areas of the coast. A connection between warming water and decreases in bull kelp is concerning because the worlds oceans are becoming warmer as a result of climate change.

Comparing Observations within the Region

The Southern Gulf Islands are emerging as an important location for understanding the impacts of marine heat waves on bull kelp. In our monitoring sites around Mayne Island, we have observed a slight overall decline in areas covered by bull kelp (see graph below). Most of the declines have been observed in monitoring sites located on the warmer north side of Mayne island, where there is also a greater influence from the Fraser River. Comparing long-term monitoring results from different places and programs across BC provides insight into the factors that influence the health of bull kelp. For example, the overall decline we’ve observed locally is much less than areas further north where sea surface temperatures were higher between 2014 – 2016, and in some areas of BC, bull kelp has increased following the return of sea otters. Without long-term monitoring and collaboration between organizations, these changes would be left unexplained.

The Importance of Citizen Scientists

From a cost perspective, the role of citizen scientists is critical to many long-term monitoring programs, which would otherwise not be possible due to a lack of funding. Though this cost savings is a key benefit, the importance of citizen science goes beyond saving money. When community members get involved in science, they learn more about the environment and the reasons to care for it. They become empowered to observe and care for local ecosystems through direct experience. Engaging in citizen science also provides an opportunity to meet new people and share discoveries with friends and neighbours. Thank you to all the volunteers across the Southern Gulf Islands who participated in this program in 2022, and to the Sitka Foundation and community donors who helped with the financial costs. Something exciting is happening in the world of bull kelp monitoring around the Southern Gulf Islands! Our long-term monitoring program, which previously focused on seven sites off the shores of Mayne Island, has exploded to Read more… 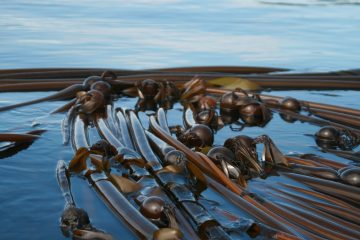 Bugles and Baselines – Nine Years of Bull Kelp Mapping around Mayne Island, B.C. Kelly Fretwell and Rob Underhill Have you ever made a bugle horn from a piece of washed-up bull kelp? If not, Read more…