2022 marked the 13th year of eelgrass monitoring by the Mayne Island Conservancy. One year ago, in December of 2021, we reported a shocking decrease of 26% in the area covered by eelgrass since 2009. Through the spring and summer of 2022 our staff selected nine eelgrass beds to monitor, to help determine if this trend in eelgrass decline was continuing. Unfortunately, our results clearly show the decline continues. Eelgrass has now declined by 41% in area since 2009 within our monitoring sites, which include all the largest eelgrass beds around Mayne Island.

To learn more about the importance of eelgrass ecosystems, read this article.

In this article we will review each of the locations where we completed surveys in 2022 and then discuss possible causes for the loss of eelgrass we have observed.

This site was surveyed in 2022 for the first time since 2009. The area covered by eelgrass at Navy Channel Beach decreased by 68% (1.12 acres) during that time.

Horton Bay has been surveyed five times since 2009. The decrease in area observed since 2015 accelerated in the last year. The remaining eelgrass is increasingly fragmented into small patches, and percent cover within the remaining areas has decreased (anecdotal observation). More than any other site, it is not hard to envision a complete loss of eelgrass here where only a short time ago there was a healthy ecosystem. Persistently poor light conditions caused by sedimentation from shoreline development and within the watershed is an obvious impact in Horton Bay.

We surveyed just a subset of our monitoring site at Miner’s Bay this year. We were primarily interested to see if the massive log jam that piled up briefly there in the Fall of 2021 had impacted the eelgrass south of the dock. There was no significant change in area covered by eelgrass or in percent cover between 2021 and 2022 for the area we surveyed (south of the dock), other than where a new private floating dock has been installed at the deep edge of the eelgrass. As reported in last year’s update, the area covered by eelgrass within our broader monitoring site at Miner’s Bay declined by 27% (2.28 acres) between 2009 and 2021.

We surveyed Piggott Bay for the fourth time since 2009. We have observed a decrease in the area of eelgrass at Piggott Bay of 24% (0.8 acres), though the area covered has been relatively stable since 2016. There is an extensive area on the nearshore side of the existing bed where eelgrass should be able to grow, leaving us to wonder if the bed there was once more extensive into the intertidal zone prior to 2009.

We surveyed Kadonaga Bay for the first time since 2009. A change in eelgrass here cannot be determined with accuracy because the 2009 survey was very rough, using a towed underwater camera, with only a couple of waypoints along the deep edge of the bed. The eelgrass we observed in 2022 was patchy and low density, which would have been difficult to survey accurately using a towed camera. We did not include this survey site in our overall calculation of eelgrass decline for Mayne Island. The data we collected in 2022 can be compared to future years surveys.

Though most of our efforts focus around the shores of Mayne Island, in 2019 we partnered with the Galiano Conservancy and received funding through the Habitat Stewardship Program to survey additional sites. During that year we surveyed select sites throughout the Southern Gulf Islands from Valdes to Saturna. One of those sites was Grimmer Bay, North Pender Island, which was first surveyed in 2012 by Seachange Marine Conservation. The eelgrass decreased in Grimmer Bay by 26% (1.26 acres) between 2012 and 2022. We believe the declines in eegrass we have observed at this site and around Mayne Island are happening throughout British Columbia where similar situations exist. Unfortunately, there are few fine-scale monitoring programs in BC, and many important eelgrass beds have never been surveyed. This means big changes can happen to these ecosystems without being detected.

There are several known and suspected causes of eelgrass decline. It can be a challenge to figure out which ones are the most important. With each year of data we get closer to figuring it out, but there are still a lot of questions unanswered. Below we discuss some of the things we think are driving eelgrass loss and why.

In the shallow nearshore edge of eelgrass beds, we are beginning to suspect increases in sea lettuce may be a significant cause of eelgrass loss. Sea lettuces, of which there are several species known to Mayne Island, are annual species of green algae that can create extensive, thick mats under high nutrient conditions. These conditions are most likely to occur in bays with shallow, slow-moving water, and where there is a significant input of nutrients from the land, such as from agriculture or septic systems. We have observed sea lettuce covering eelgrass in dense mats in the following locations: Village Bay, Gallagher Bay, Dinner Bay, Navy Channel Beach, and Grimmer Bay, North Pender Island. Observations at Village Bay are particularly interesting, where sea lettuce was removed each year from 2000 to 2019 by the Village Bay Improvement Association, and where eelgrass decline occurred during 2019-2022 when considerably less sea lettuce was being removed. Increases in Ulva spp. and resulting seagrass decline has been well documented in other parts of the world.

Erosion from development along shorelines and in watersheds results in lower light availability for eelgrass. With increased severity and frequency of heavy rainfall events such as the one we experienced in the fall of 2021, the impact of sedimentation on eelgrass beds is expected to increase. Retaining vegetation along shorelines and waterways is the best way to reduce erosion. When surface water is drained and directed into ditches, it typically moves faster and in greater volume, increasing its erosion potential and retaining suspended sediments. When possible, allow water to slow down, and spread out like it would naturally in an undeveloped ecosystem. Retain natural wetlands and wet forests that help slow down surface water.

During our dive surveys, we have observed that water clarity (and light availability for eelgrass) greatly decreases within 3-8m of the shoreline every time a boat (usually a ferry) passes by because the waves stir up the sediments along the shore. In some locations, the boat traffic is frequent enough that this leads to a significant decrease in light availability for eelgrass in the shallow edge. We suspect this is a contributing cause of decline in eelgrass beds located near high traffic areas, particularly ferry routes.

In some locations, mooring buoys are located in eelgrass beds. As the moored boats move back and forth in the wind and current, the heavy chain drags along the bottom, creating a circle on the seabed where no eelgrass grows. These patches are easily observed during our dive surveys. Please don’t anchor or install mooring buoys in eelgrass beds. Of the known human impacts to eelgrass, this is the easiest to identify and the easiest to avoid.

European green crab and seagrass wasting disease are two biological impacts to eelgrass that have been described in the region. We haven’t observed either in our survey sites to date therefore we don’t think either of them explain the losses we have observed in the past 13 years. A third biological impact is grazing pressure and nutrient input by non-migratory Canada geese, which has greatly increased around Vancouver Island and the Gulf Islands since they were repeatedly and intentionally introduced between 1926 and 1991.

How You Can Help

Thank you to the Sitka Foundation for helping us fund our marine monitoring programs in 2022. 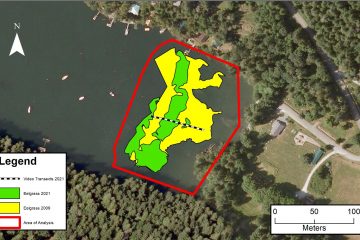 Mayne Island eelgrass declined 26% between 2009 and 2021 My most memorable marine experience this past year was snorkeling in the middle of a big ball of herring, a real National Geographic moment. I found Read more… 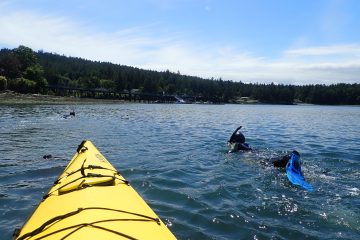 A Day in the Life of An Eelgrass Survey Team

Our day starts off on the dock at Miner’s Bay. As I walk along the pier to start loading the boat, I glance down into the bay to see how clear the water is. The water clarity (turbidity) has a big impact on Read more… Eelgrass Meadows: Out of Sight and Out of Mind

Have you ever found yourself shoving dirty clothes into a closet as your dinner guests walk up the driveway? I have! Out of sight, out of mind, right? It’s a great strategy for early dinner Read more…