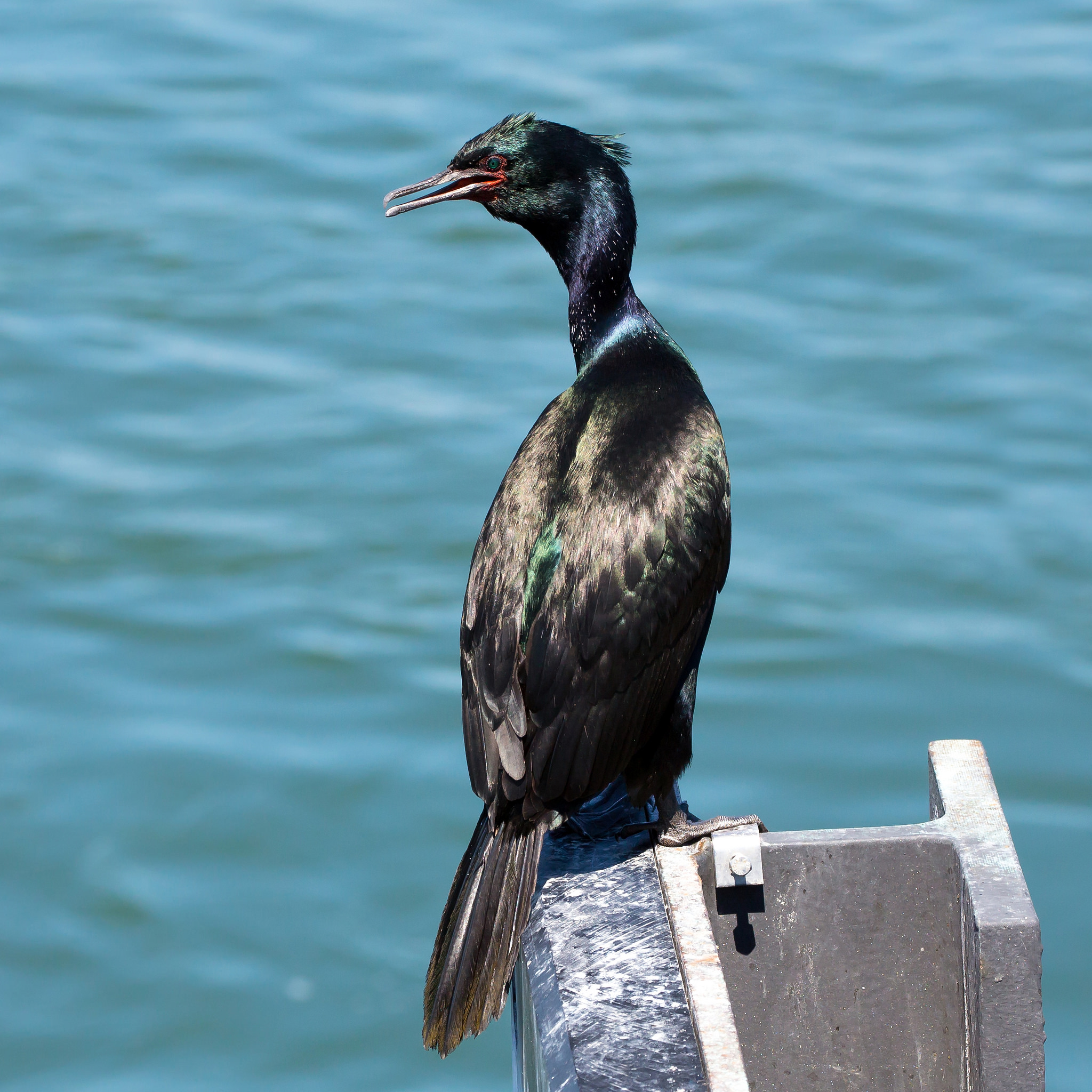 The three species of cormorants frequenting Mayne Island waters are all uniformly black, but with some breeding variations. This group of species captures fish by diving and pursuing them. They propel themselves underwater by use of their large webbed feet only; they don’t “fly” underwater as our Alcids do.

Two of our cormorant species, Brandt’s and Pelagic, are only found in the marine waters of the Pacific Coast while the third, the Double-crested, can be found in both fresh and marine waters across North America. These three species also overlap in their range on this coast and as such have evolved a non-competitive foraging strategy: Double-crested cormorants forage on schooling fish at mid water depths in open water and well above flat bottoms; Brandt’s cormorants pursue fish close to rocky or flat bottoms and Pelagic cormorants forage for fish and other organisms among rocks and reefs. So, on the surface you will see Double-crested and Brandt’s in mid channel of Active Pass, foraging at different water depths, while the Pelagic are closer to shore foraging over submerged reefs and rocky areas. Cormorants have specifically adapted eyes that allow them to see well both above the water and under the water. 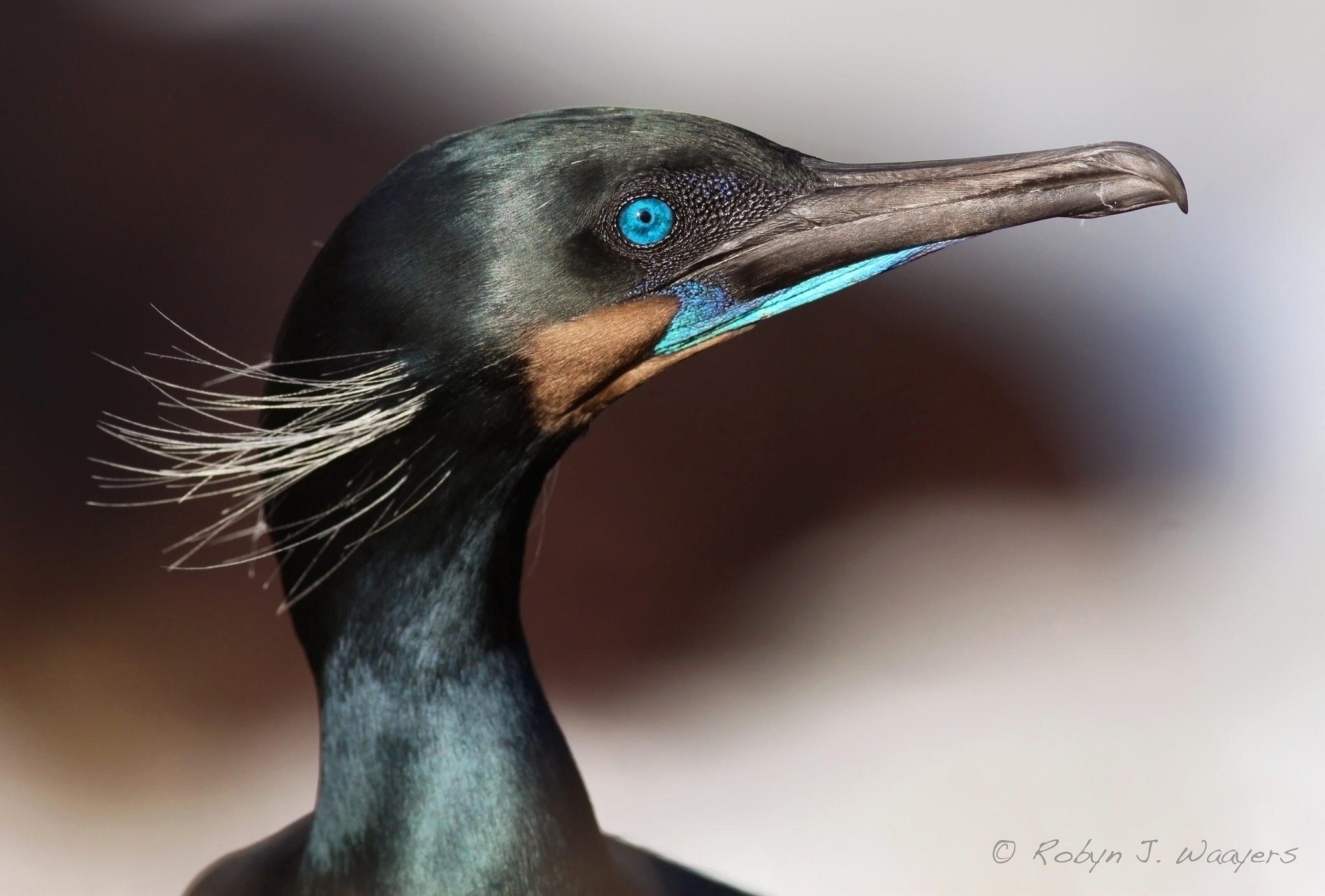 An iconic behaviour of cormorants after feeding sessions is to perch at suitable sites and spread their wings. The purpose of this posture has been discussed and debated for quite some time. Is it thermoregulation or drying? Studies on some of the species of cormorant found no correlation between the posture and air temperature or sunshine. Cormorants are known to have a layer of waterproof insulating feathers near their bodies to protect from heat loss, so the current consensus is the wing spreading is for drying. Another characteristic of all cormorants is that they regurgitate pellets, which is a way of removing inedible prey parts from their bodies. These pellets contain fish bones and shellfish outer shells.

Of the three species found around Mayne Island, the Double-crested and the Pelagic are resident breeders with colonies in the area – for example on Galiano and Gabriola – and the Brandt’s is at the northern limit of its breeding range in BC but is widely dispersed in winter. 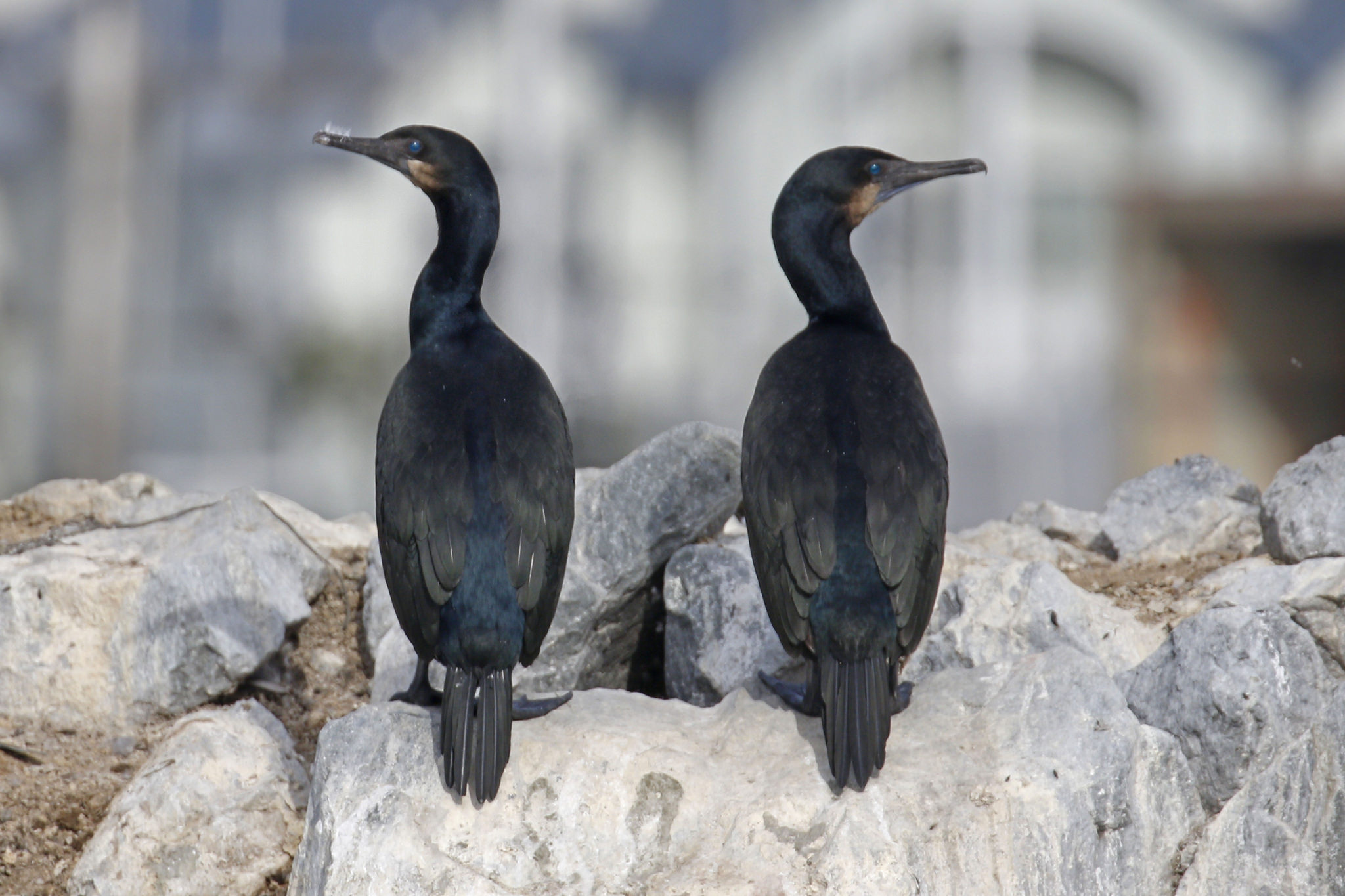 The Brandt’s Cormorant is medium sized and in winter is all black. It is found in inshore coastal waters—especially areas with kelp beds—as well as large bays and occasionally estuaries or coastal lagoons. In our area, Brandt’s numbering in the thousands, frequented Active Pass over the winter in the 1970’s. Our more recent winter counts have tallied up to 400 for all of the Mayne Island marine waters. The areas that saw the highest numbers were Navy Channel and Plumper Sound. Cormorants are susceptible to boom and bust breeding cycles related to food abundance and Brandt’s cormorant populations have been negatively affected by El Nino events over the last two decades. Brandt’s like to feed in dense groups, unlike their other two relatives, and when in flight they form long flying chains low over the water on their way to feeding areas. 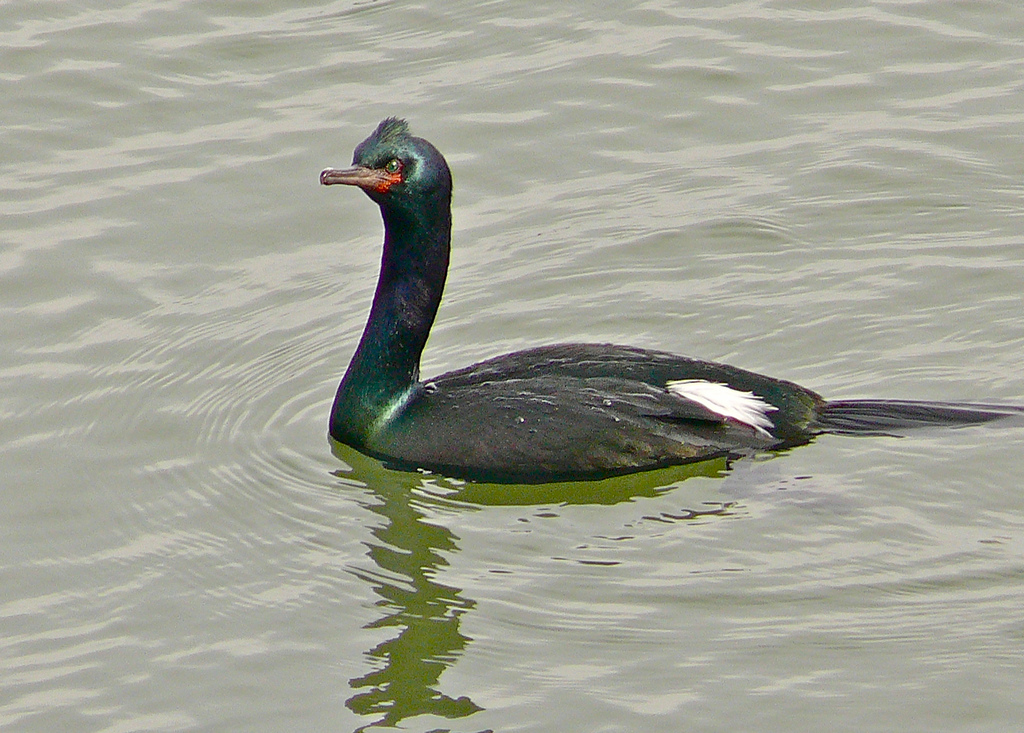 The Pelagic Cormorant is the smallest, most slender, abundant, and widely distributed of the three species of cormorants that breed along the British Columbia coast. It is a year-round resident of British Columbia’s inshore waters feeding in shallow water on bottom-dwelling invertebrates and fish over reefs and rocks. It nests on steep cliff faces and in our area it has roost and breeding sites on Galiano and Gabriola islands. It can be seen along with Double-crested cormorants perched on the Village Bay ferry pilings. You should note its relatively thin neck and smallish head in comparison to the heavier bodied Double-crested Cormorants. 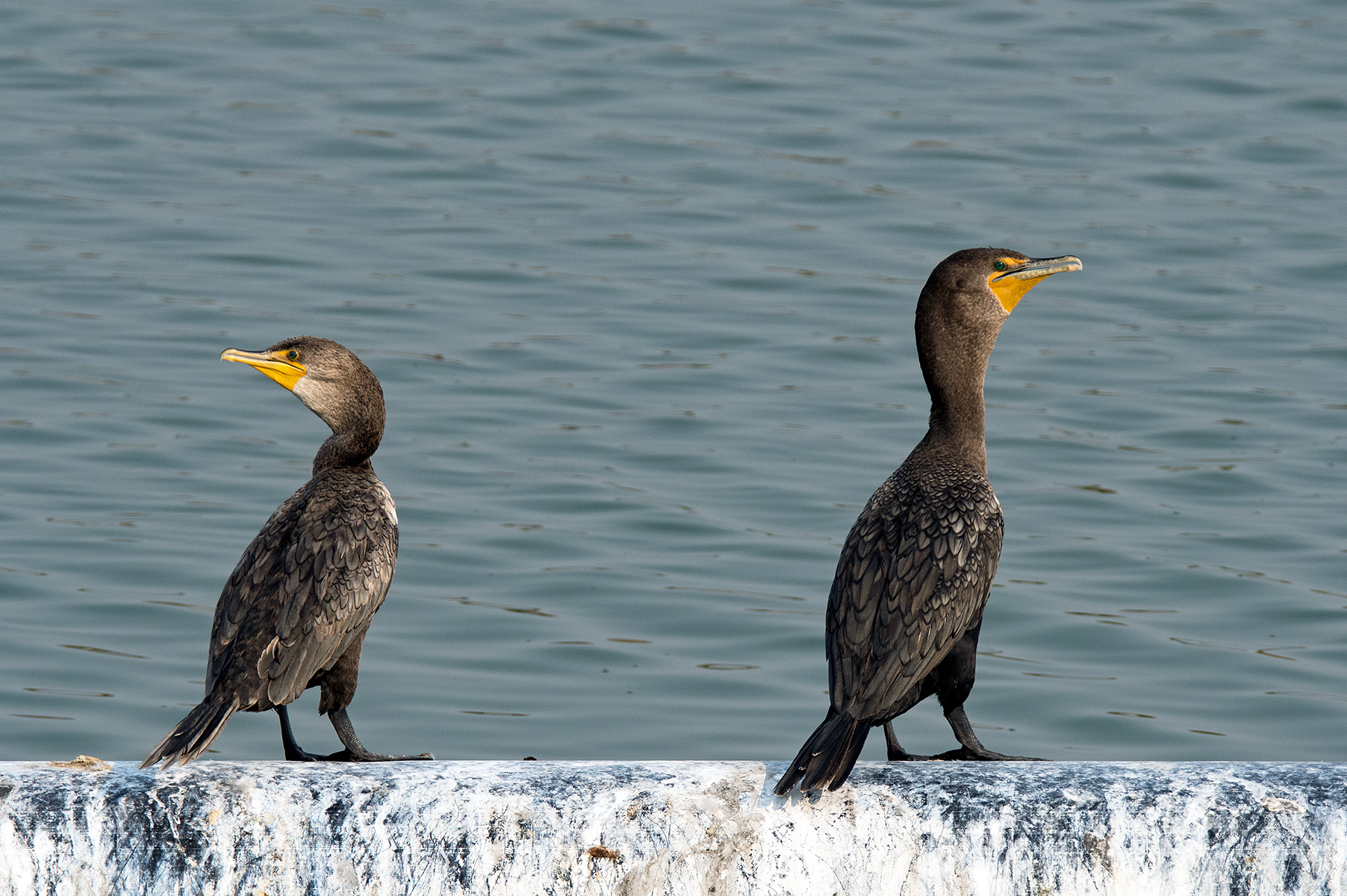 The Double-crested Cormorant is a large matte-black fishing bird with yellow-orange facial skin. On the water, they are often mistaken for loons. This is especially so in Active Pass, in winter, during high tidal flows and where multiple species are feeding in the tidal currents. These solid, heavy-boned birds are experts at diving to catch small fish. Their diet is almost all fish, with a few crustaceans. The tip of a cormorant’s upper bill is shaped like a hook, which is helpful for catching prey. In winter, they can be found on dock pilings, mooring buoys, navigation aids and rocky islets in our area. They are the only cormorant species that you will see flying over land or over our ferries. The Brandt’s and Pelagic cormorants will only fly over water.

Help us keep Mayne Island’s surrounding waters clean and healthy for cormorants and all wildlife (and people). Donate now.